If you ever thought that even the insane mods for Audioshield was never enough for you, now there’s something that will relieve that masochistic need. McOsu has been out for quite some time, but only really has it obtained a VR adaptation so let’s review it and see where it puts Audioshield as our reigning fitness champion for music.

McOsu is a unique take on the DDR scene in that it comes at you extremely fast by default settings. This game is not for the lighthearted and while you may be doing similar actions you might find in Audioshield or DDR, you will be completing those actions at a fraction of the speed. There’s no real way to describe how difficult it is to play the full insanity that is McOsu. 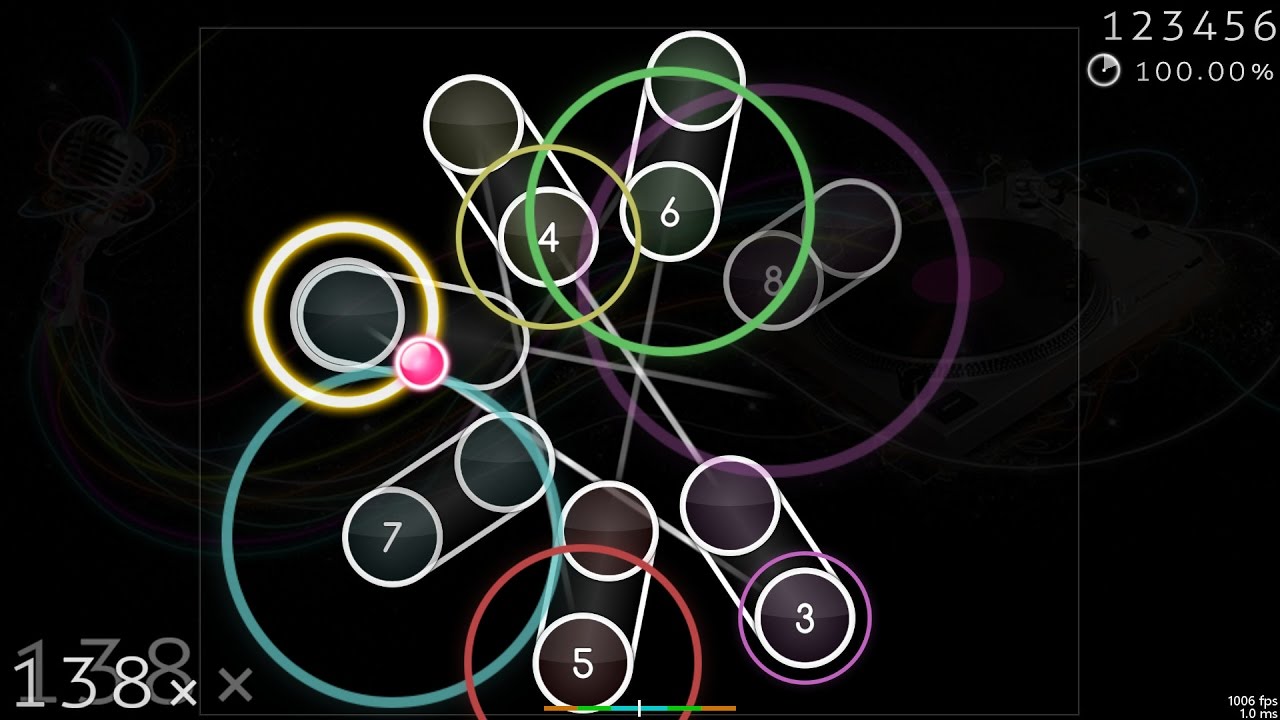 The graphics are not splashy like Audioshield, but that is not because it lack graphics. Instead of making a splashy display each time you hit something, the game uses the toned down graphics to put more speed into the game. This game has the best graphics it needs for a player to play the game in the more insane elements, something that people felt Audioshield was lacking and thus was solved by the modding community.

You know that the developers have a sense of humor when they put amusing descriptions as part of their requirements. So long as you have 512MB RAM with 50MB of space with an OpenGL 3 compatible graphics card and a processor that is “Not a Potato”, you can play this game. Even at the recommended level, you only need an i5, 2GB RAM, GTX 970, and still 50MB of space. This is a sign of a very well optimized game that is meant for people to push to the limits. This also marks a VR game with the lowest minimum requirements in the industry.

As I’ve mentioned, the game is set on insane by default and you can make it go up to 10x faster. There are so many options to make this game more insane when it comes to fitness. You can increase the area that the balls are sent to, decrease the distance between you and the shooter, decrease the dial size to make everything harder to hit, and even turn on a strobe light mode that flickers light so that is difficult to even see the dials. This game will have most begging for mercy if they try to push themselves too hard with it.

The game is extremely easy to get into and has a fantastic play style to it. With so many additional modifications you can make in the game, the very slow to the super competitive can play this game equally. The game is built to do one thing and it does that one thing very well, which makes wonder how Audioshield didn’t learn from the previous Osu’s success. Once again, we have a game that finally reaches my perfect score.

I don’t give out a perfect score willy-nilly and it takes a lot for me to say something is as perfect as it can be. McOsu would be the first fitness game I would suggest to anyone because no only is it insanely difficult and scalable, but it is also FREE. That’s right, this game is completely free with the option to donate via DLC packages. This game is great because of its difficulty, its simplicity, its complete development, and, most of all, because it all comes at the price of being free.