Finding ways to help overcome challenges is an ongoing goal for parents, educators, and healthcare providers of children with autism. Now, there is evidence that augmented interactive play sets could play a role. Children using the augmented systems are given the ability to control and add their own content, which researchers believe can improve cooperative play with others and help them increase their confidence.

According to William Farr and Nicola Yuill of the University of Sussex, UK and Steve Hinske of ETH Zurich, Switzerland, children with autism are often affected by social difficulties and an impaired understanding of the way objects interact. Farr and Yuill investigated how toys, including the “Augmented Knight’s Castle” (AKC) might be adapted to better help those children and maybe even be used as a therapeutic tool. The effort to make playsets more interactive will hopefully make it easier for kids with autism to gain confidence and be better at cooperating with other children because they are better able to understand how the objects interact.

The research team, including scientists from the Children and Technology Lab at the University of Sussex, published their findings in the International Journal of Arts and Technology. The report explained how they examined play with the Knight’s Castle set that included towers, moats, parapets, and model people.

After watching children play, the team created the Augmented Knight’s Castle by adding a wireless networking system and radio frequency identification tags (RFIDs). This allowed for feedback and programmable aspects in the set, which made it possible for children to produce sound and movement through certain actions.

They tested the playset with autistic child volunteers who played with the set. Their findings revealed promising results and researchers concluded the adapted sets helped children improve their understanding and interest in the toy, and also boosted their level of interaction with other children when playing together. The team noted increased parallel and cooperative play, and saw that solitary play tended to decrease when children used the augmented playset. Researchers also noticed that autistic children playing with the augmented set tended to play with the Playmobil figures more, too.

One of the greatest challenges faced by children with autism is their ability to understand the world around them. A lack of control in their environment means daily frustration. The ability to take control when using a configurable playset shows them it’s possible.

The augmented playset incorporates feedback systems and can respond to the way in which the children are playing, which the researchers hope opens new doors to how autistic children can play. Gaining that sense of control should help them in many different ways, and these improvements can be carried over into their everyday lives. Researchers also hope using the augmented playsets can help children feel less isolated and gain an increased understanding for how to control objects and better engage other people. Ultimately, these games, and their use of augmented technologies, could be the path to finding even more breakthroughs for autism and various other conditions in the same spectrum.

According to the research team who built the augmented castle playset, “There is potential for systems like the AKC to be used in a therapeutic way. They also explain, “the play set could be used diagnostically by allowing evidence to be compiled to provide a baseline against which a child’s position on the autistic spectrum could be aligned and help improve a borderline diagnosis so that a child’s ambiguous impairments might be better addressed.” 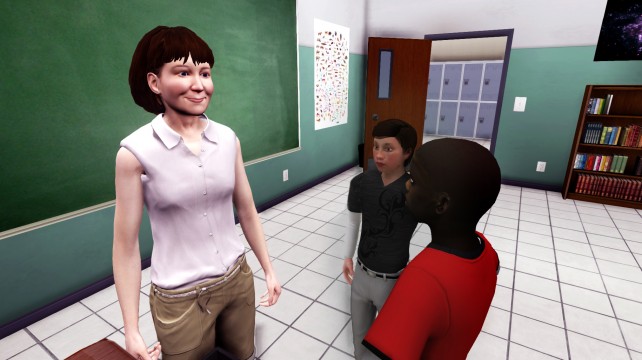 The bottom line is autistic children now have a new tool available to them that is fun and interactive, and allows them to better interact with their environment. In the long run, this development could provide a world of difference to children struggling to adapt to their everyday surroundings.