Home Experiences Beat Depression, Improve Health and Get Out of the Hospital! All with...

Let’s face it: Lengthy hospital stays can become very bleak no matter what your ailment. While some conditions can’t be reversed, there is some help coming to patients who are being struck with the sheer isolation and loneliness that is inevitable when you’re getting treatment. That help is coming in the form of VR. Though lonely individuals have relied on the Internet to fill the social void, virtual reality will likely prove superior as it simulates reality in vivid detail. The use of VR for socialization, therapy and medical treatment has doctors quite excited about what is to come in the future. 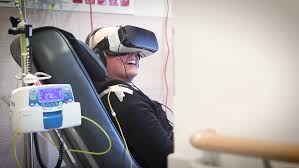 Joy, an immersive virtual reality program, is currently being tested as a high-tech means of treating loneliness experienced by hospital patients. Such patients often spend weeks or even months in hospitals and other health treatment facilities with little interaction beyond conversations with nurses and visiting family members. Such individuals welcome any type of stimulation or interaction, even if it is virtual. This virtual reality socialization tool was created by the Australian VR firm Liminal. The health insurer Medibank commissioned its creation.

Linda Swan, Medibank’s chief medical officer, believes that this lack of personal stimulation and interaction can lead to increased disease risk and possibly even slow down recovery times. “We know it’s more common for people in hospitals,” she said. “We wanted to find a way to do something in the hospital setting to alleviate that feeling.”

Neuroscientist and head of research Sami Yamin, hopes that the VR experience will be the perfect escape for patients. The Joy experience involves cartoon characters stationed in a circle around a campfire. The patient makes use of Google Daydream View along with a hand controller. He chooses a story from a book. One of the cartoon figures then reads the story aloud. According to Yamin: “Campfires are where communities gather,” he said, “We wanted them, for a short time, to really leave … their hospital environment.” Joy is currently being tested at Brunswick Private Hospital in Melbourne.

Though sitting around a virtual campfire feels a bit childish, Joy was designed to appeal to as many people as possible. Sure, its graphics might pale in comparison to the elite games available on the HTC Vive headset yet the purpose of this virtual reality experience is not to enamor users with aesthetic beauty. Furthermore, the experience’s limited interactions are by design. “We were mindful there are limitations on the hospital patients and what they can do,” Yamin said. “We did not want to have them limited by any specific pain or limited movement.”

Joy was designed for individuals who are bed-bound and have minimal range of movement. The majority of hospital patients are severely limited in terms of what they can do. Some are sick with serious illness. Others have undergone a shoulder or leg surgery. These individuals are sitting in one place for an extended period of time with little to do and few people to talk to. 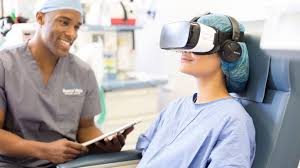 The Future of Joy

It is not yet known if Joy will be used in hospital rooms across Australia or the world. If the initial trial goes well, Medibank will likely expand the program far and wide as an important component of its myriad health services. It is worth noting that Joy is the company’s first-ever virtual reality project. Yamin sees huge potential for VR. “I think VR is going to have a massive impact on the medical profession,” he said. “Assessment and early diagnosis, to rehabilitation and ongoing recovery and pain management.”

At the moment, most hospitals and health insurers view virtual reality technologies as too costly for their facilities. However, Joy is poised to be a low-cost means of boosting patient well-being. Furthermore, unlike other virtual reality software, Joy does not contain violent or otherwise inappropriate content that would disturb hospital patients. Perhaps Joy will pave the way for a closer relationship between medical researchers and virtual reality developers. Such a relationship would spur the creation of high-quality VR content that improves the lives of patients across the world.

Boxing VR Fitness Games – Which is Right For You