Home Hardware Beat Stress and Improve Sleep with this VR Add on! Those who are familiar with VR software know there are more than a handful of escapist simulations that surround users with comforting environments such as camp fires, sunny island settings and lush green forests. Though these environments do not feature an abundance of interaction, they allow the user to enjoy a calming virtual landscape with plenty of pleasurable sights and sounds. Similar software has been developed to improve sleep quality and reduce stress, making VR the next best thing to hit shelves for people needing anxiety reducing solutions.

The company bringing this solution forward is Fisher Wallace Labs, a group best known for its Stimulator that reduces depression and insomnia. Their device has been dubbed ‘Kortex.’ Spearheaded by VR gurus at Fisher Wallace Labs and Arrow Electronics, the device offers a totally new way to combat anxiety and sleeplessness.

The device is strapped to the back of the user’s head. It stimulates the user’s brain to generate melatonin and serotonin while decreasing cortisol. This stimulation induces the user into enjoy a calming sensation that allows them to feel relieved of stress. Users will feel liberated to the point that they can enjoy quality rest. Kortex can be used alone or in tandem with any virtual reality headset, which would theoretically boost the technology’s capability and effectiveness on users. 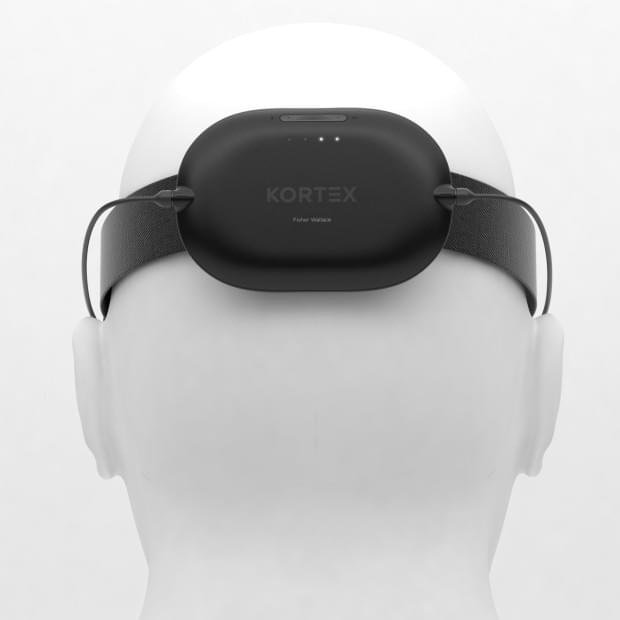 How did this all come to pass? Kelly Roman, the co-founder of Fisher Wallace Labs, directed a group study in 2009 with upwards of 400 participants. The purpose of the study was to gauge the efficacy of the company’s stimulator for drug addiction treatment. The device enhanced the sleep of cocaine and heroin addicts. The 90-day rehab retention was boosted by 50 percent compared to standard rehab. Medicaid approved the company’s Stimulator this past year due its proven capacity to treat those addicted to opioids. This means the device is available at no cost to those enrolled in Medicaid in Maine. For more ways VR impacts positively on people addicted to opioids, check out the research we covered here. The company’s Kortex device is a technological clone of the Stimulator that worked so well on drug addicts. It is the combination of neurostimulation with virtual reality. The result is a remarkable relaxation of patients in a user-friendly environment with all the visual and sensory stimulation you’d get from VR. Using just the Kortex alone is a bit of a stretch for some users, but, with VR, it’s much more effective and less threatening to potential users.

Kortex with VR even includes a free software title called Land’s End. Many consider it to be one of the top Samsung Gear VR games. Roman believes that his company will soon construct an engagement app designed based on the apps used in clinical trials. The goal is to help participants remain inspired through the establishment of goals and regular reminders. According to Roman, there is a “huge opportunity” when it comes to virtual reality content for Kortex. He believes the device will feature meditative, relaxing, physical therapy, mental therapy and telepsychiatry VR content as time progresses. Roman also believes the device will be used for educational and training purposes. He is convinced many baby boomers will soon rely on Kortex and other virtual reality technology for healthcare purposes.

This is all good and fine, but when can you get your hands on it? Fisher Wallace Labs recently brought several MIT engineers on board to perfect the Kortex design package. It appears as though the device will arrive on schedule in the final weeks of July 2017. It will be available for purchase in August at the latest. The device will likely cost $349 at launch. Not a bad price to pay to ditch stress, get some sleep and enjoy a relaxing VR environment if you ask us.