One of the milestones in achieving an immersive virtual experience is the ability to be able to physically feel the virtual worlds. While at this point people are able to experience virtual reality with visual and auditory sensations, physical touch has been thought to be years off. Nevertheless, a newly revealed technology coined as the ‘Synethesia Suit’ shows that what once was thought impossible, may be part of our daily lives sooner than we thought.

One early approach of achieving a physical feel of a virtual world was taken by The Void. Announced as a virtual reality theme park, The Void places people in a physical space, which has been previously mapped out in the virtual world, allowing people to experience virtual reality in a more immersive manner. While by mapping the physical world and applying virtual world overtones on top is one way to achieve physical feedback and sensations in VR, it nonetheless lacks the practicality of everyday use, outside of such large-scale installations.

The Possibilities of a Full-Body Haptic Feedback Suit

One of the best ways to achieve a physical feel in the virtual world is through haptic feedback. In fact, in some of our previous pieces, we’ve already discussed a few such devices that allow you to touch objects in the virtual world. However, up until this point, there wasn’t a full-body suit that allowed you to do so. 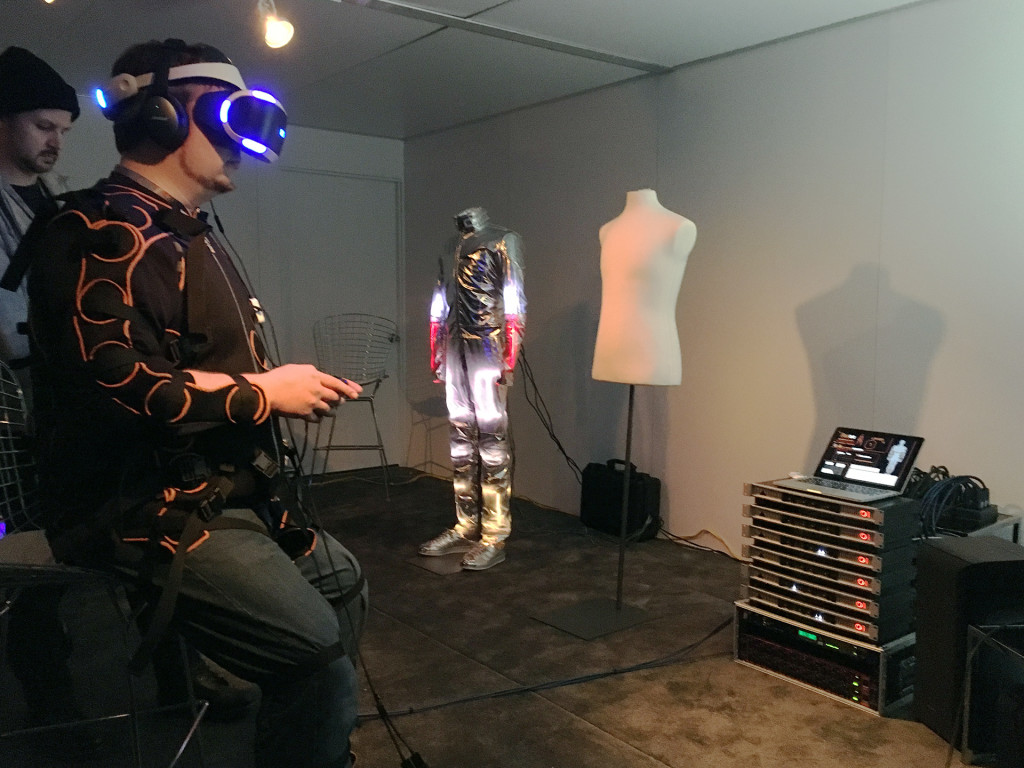 To achieve full-body virtual reality physical feedback, the Rez Infinite ‘Synesthesia Suit’ delivers an experience, which hasn’t been available before. The suit is developed by college students at the Keio University Graduate School of Media and Design in Japan, Yukari Konishi, Nobuhisa Hanamitsu, Benjamin Outram and Kouta Minamizawa. Being a full-body velcro-strapped suit, which covers the player’s legs, torso and arms, the Synesthesia Suit implements the power of countless tiny vibrating motors, which create the physical haptic feedback of the virtual world, similarly to how your smartphone vibrates, when you touch its screen.

The Synthesia Suit and VR Fitness

The suit presents enthusiasts of Virtual Reality fitness with a whole new level of virtual world immersiveness. While you won’t be able to achieve a higher level of strength sensitivity, as you still won’t be able to feel the weight of physical object, the immersive feel provided by the suit can nonetheless transcend the immersiveness of VR experiences. According to people who’ve tried out the suit at the Global Grad Show showcase, such as our friend Seth Porges from Forbes, described the experience as ‘traveling through a psychedelic kaleidoscope.’ What’s more Porges added that he could feel the impact with the virtual objects.

While still in development phase and no-way near to appearing on the consumer market, the Synthesia Suit is definitely a technology, which shows that VR can also deliver physical immersion. In combination with VR backpacks, such suits can remove the tethering from our world and transcend us to a tethering in an immersive virtual world. Scary for some, this thought manages to boost the enthusiasm of believers in virtual reality and may very well be the right step forward in delivering a true VR Fitness experience.