It wasn’t long ago when laser tag was one of the more popular activities for kids and young adults who were looking to have a good time. Laser tag still exists yet it might soon be replaced by VR battles in warehouse-scale virtual reality arenas. Anvio VR is leading the way in such full body virtual reality multiplayer experiences. Players can move without constraints thanks to Anvio VR’s wireless game experience. It is possible that people will one day scrap their gym memberships for memberships to fitness-oriented virtual reality experiences like Anvio VR. This virtual reality workout appeals to youngsters, adults and just about everyone in between.

Anvio VR is a brand new virtual reality experience that makes use of motion capture technology. This incredibly fun experience is enjoyed amongst a group of friends, colleagues or even total strangers. They engage in virtual reality combat in warehouse-size arenas. Just about everyone who has tried Anvio VR raves about its fun factor. It is an important step for virtual reality, taking the technology out of the home and into public settings for group enjoyment. The beauty of Anvio VR is that it breaks new barriers. The VR battle system is not restrained by specific hardware requirements of traditional out-of-box motion tracking technology. 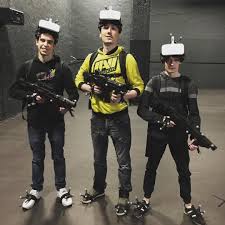 Anvio VR allows players to enjoy the freedom of movement they have long-craved from virtual reality experiences. The virtual battle arena empowers players to run, wave, sidestep, crawl, jump and perform just about any other type of movement. The VR technology responds in accordance with one’s specific moves. The system tracks each player’s unique movements and replicates them in the virtual realm so players can engage in a truly real-time competition in the virtual realm.

The massive play area makes use of a completely wireless system so players do not have to concern themselves with loose cords or running out of room. The result is an incredibly deep level of engagement in which players truly feel as though they are competing in the virtual reality realm that appears on their headsets. A single Anvio VR arena is capable of hosting unique game content that can be altered in a moment’s notice. This level of flexibility will prove quite important in the push to bring VR to the masses in the public realm as opposed to delivering it to users’ homes.

The beauty of Anvio VR’s freedom of movement is the fact that users are able to “go hard” and exercise at their preferred intensity level. This unique quality just might be what separates Anvio VR from the rest of the pack. Imagine heading out for a virtual reality battle at one of Anvio VR’s warehouse-scale arenas instead of going to the gym. The experience would prove much more enjoyable than a gym session. More importantly, exercising in VR without constraints while having a ball would prove quite motivational. This is exactly what people need to start enjoying workouts rather than dreading them.

Anvio VR is new to the market. The group opened its VR arena doors to paying customers earlier in 2017. The initial Anvio VR competitions took place in the group’s initial venue, located in Moscow. Company representatives state they have since served around 2,000 customers. Company insiders have noted the group is looking to expand beyond Russia’s borders. Those who monitor the Anvio VR website have found hints that the company might soon open a new venue in London.

The allure of Anvio VR is especially compelling as its virtual reality gameplay is no-nonsense. Take a look at the videos of Anvio VR gameplay and you will find the company’s focus is purely on providing players with an exhilarating level of fun that gets the heart pumping and the adrenaline flowing. It might not be long before Anvio VR facilities open across the world and expand the footprint of virtual reality that much more.