If you haven’t been hearing about all the innovations in Virtual Reality lately, you’re living under a rock. One thing that shockingly isn’t getting a lot of chatter lately is the hand tracking capability that VR provides. While VR is a limitless world of possibility, it would be foolish to gloss over just how important this aspect of the industry can be to our lives, health, fitness and beyond. Here’s what you need to know!

This is a very broad category that is currently taken up by a lot of items that fit underneath Tools and Accessories. Keyboards, surgical instruments, and a maestro’s wand have all been simulated in the Virtual World before for either educational or entertainment reasons. However, think of how this technology could affect hospital treatment. We have the following technologies currently:

There’s so much more, and I could go on, but you see the trend. Now, imagine if a doctor could feel, hear, and see via virtual reality instead of a patient needing to go into the office or hospital for a consultation. With this in mind, we could literally re-imagine hospitals with the use of these technologies. Diagnosis for Urgent Care without needing to go to an office would provide better separation of individuals who come in with minor issues versus those who come in with more dire issues like a heart attack, ultimately resulting in a much more efficient and rapid service to patients.  We already have an A.I. taking on court cases, why not an A.I. that can diagnose basic sicknesses? Is this really that big of a leap from what we currently have with medical research online? Take the example of WebMD, which already gives us clues about a possible diagnosis. Now, imagine if WebMD VR was available and that it could give us a free Virtual Reality checkup and a suggestion of what to do with a virtual physician who could actually make an educated diagnosis from the data collected virtually!

Bringing it All Together

A doctor can see your entire body in the VR world. He can ‘see’ everything from the shape of your face to the interaction of your blood cells depending on the resolution. Doctors already use a form of hand tracking when surgeons have to do incredibly precise tasks that require an absolutely steady hand. Such technology coming out for VR would further improve how much non-digital tasks, such as surgery, are done by digital hands. Sony’s new gloves are so precise that, according to some reports, “the controller can be configured to control the activation of the emitters and the reading of the proximity sensors in a time division multiplexed arrangement.”

With the pending massive release of Sony’s PlayStation VR, it’s obvious that Sony has a big winner on their hands. The next step may actually be for the tech giant to release a hand tracking solution. Their most recent patents seem to all but guarantee that this is the case, as two were recently released under the banner of magnetic tracking of gloved fingertips. You can read up more about the patents here. How will they work? The patent describes a glove interface with a plurality of emitters and proximity sensors. 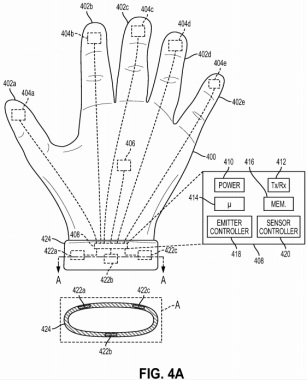 If this sort of innovation is coming in a game consul marketed to the mainstream, you might think that perhaps the VR world is looking past the other major ramifications. The truth is that any growth in this sort of research will pave the way to changing the way we approach nearly everything we do from games to surgery and we can’t wait to see how much father we can go!