When you think of gaming in virtual reality, it’s easy to just imagine zoning out with a hoard of zombies coming at you or an endless array of colored targets attacking you from all angles–and we love that sort of gaming. It’s great to get your heart rate up and it’s great to help you blast some calories. But one thing that a lot of people believe is lacking in VR is working out your lower body. We’re not just talking about standing and walking around–we mean working out! Enter Hot Squat VR! We had a chance to talk with the team (Maximillian Coburn, Kevin Thomas, and Matthew Murphy) that created this game about all things VR, fitness gaming in virtual reality, proper form for your squats and why this game is a lot more than you’d think. Here’ what they had to say about the game and the future of the business.

VRFI: First and foremost, we love the concept because we’ve done our fair share of squats over the years but this adds a fun element. You can tell how much we liked it at our first person review here. Walk us through the development of your game and tell us why squats inspired you.

Hot Squat Team: It all started when we were prototyping a different VR game, and there was a part where you had to squat to move through a low vent. The seed for the idea was born there. Our lead developer was already a fitness fan and enjoyed squats but he had CLS (Chicken Leg Syndrome), so he figured that it’d be fun to make a really simple VR game where the sole purpose was to squat. He pitched this idea to us, and we were on board to make a small free squatting game, it sounded fun!

VRFI: There’s a distinct look and feel to this game that will have some people reminiscing about the 80s or 90s. Was that deliberate? How important is the theme and look of the overall experience to the process of creating the game itself?

HS: We drafted up some ideas and decided that an 80s/90s aesthetic would be fun to do, so we made the music and art to reflect that. From then on, the development process only took about a couple months, which is really short for a game, but we wanted to do a short fun project. We usually like having a theme behind all of our games, and once the game was wrapping up and we noticed all the different colored gym goers in the game, we realized that a good theme for the game was that anyone of all shapes, sizes, and colors are welcome at the gym. It doesn’t matter who you are, the only thing that matters is the amount of gains you get. This is another reason why we made the game free, we wanted anyone to be able to access it. VRFI: We’ll come out and say it: Finally a game that works your legs! Tell us why you decided to make squatting the focus of the game.

HS: As stated before, the creator of the idea of the game enjoyed squats but was having trouble moving up in weight, so he wanted to create a game that would help him with that. Also, with the current VR environment, we saw that squatting was one of the most suitable exercises to do in VR.

HS: In regards to your question, we could have attempted to put more restrictions to try and encourage proper squat form, but that would ultimately punish players who were already doing proper form. We put the responsibility on the players to do proper form as the game is all about self improvement, and they would only be cheating or hurting themselves by not using proper form. That being said, we did put measures in place to try and prevent cheating.

VRFI: Did you know that people were going to use this as a workout tool? Were you surprised at the users’ performance?

HS: No, we were not. We didn’t realize how tough it would be, because normally you’re not doing 100 squats in a row. We were really shocked to see how many people were getting the “Golden Glutes” achievement (doing 175 squats in one round), we actually had to add more difficult achievements to give our players more of a challenge.

VRFI: How do you feel about people using this game for fitness results?

HS: It feels great because we didn’t really see many games that worked legs too much, so we were excited to bring that to the table. It also feels good to see that people are using our game for their own self-improvement.

VRFI: The game gets harder as you go, and not just because of the repetitive squat punishment. How important was this progressive approach to the experience? It must have been difficult knowing where to be easy and when to be harder on users.

HS: We see it as the first two rounds being a warm-up, and the third round serving as the main part of the game. We figured that if it went straight into wave three, it would be too jarring for players, and if it stayed at wave one the whole time, it would be a cake walk.

VRFI: Any time a game comes out that hits the arms, the next question is: Why is there very little impact on your arms in this game?

HS: We toyed with the idea of incorporating hands in the workout, but ultimately it didn’t feel quite right to us and we thought it better to put our energy and time into just the squatting experience.

VRFI: As we mentioned in our review, the leader board was huge in helping us stay motivated. How important do you see it to the overall experience?

HS: We think the leader board is very important. However, we feel it’s not about getting the #1 spot in the world, but more about seeing yourself move up in the leader board position and observing your own self improvement. 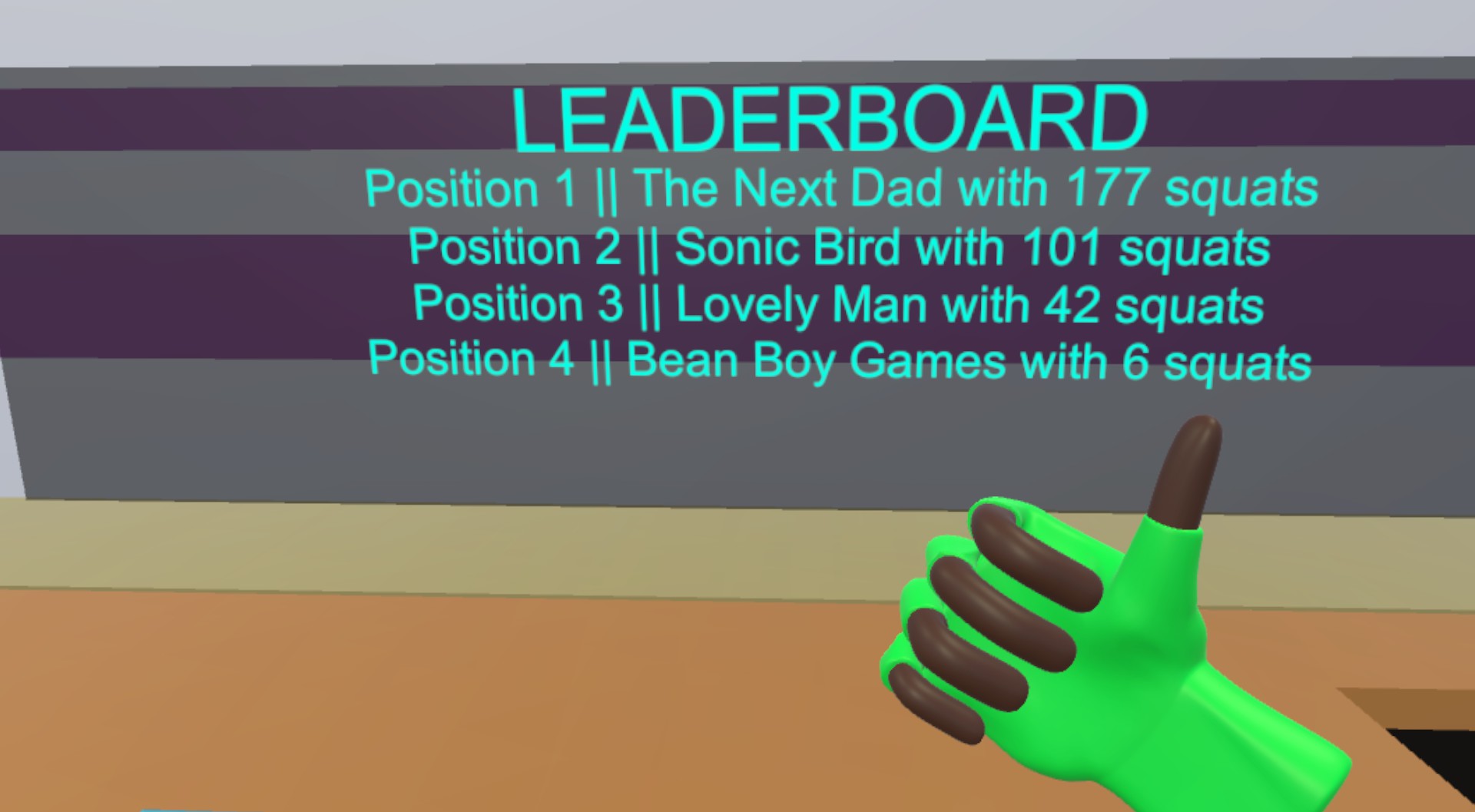 VRFI: The world of VR is gradually realizing how important fit experiences are. Where do you see things evolving?

HS: As the different types of VR trackers get made, we feel that it will open the door to other types of fitness VR games, such as yoga and other full body exercises. At this time, it seems pretty limited to the current day equipment.

VRFI: Do you workout in vr? Would you recommend anyone to do so?

HS: Every time we play a VR game it seems to be workout! We have all spent a lot of time working out in Hot Squat while developing and testing it, so we’ve had a lot of experience and fun working out in VR. We think this is a great way to workout, because it can make a game out of something that a lot people see as a chore, and puts you in an environment that you couldn’t experience in real life. However, sweat with the headset is a real problem, players may want to consider buying face contacts made out of a different, less absorbent, material.

VRFI: What are you working on now?

HS: We just finished making a VR minimalist physics based puzzle game based around discovery! Its name is UNTITLED and it will be available here! We are extremely happy with how this game turned out. As you can probably tell, this game is not a workout game but we have had testers tell us that throwing cubes for an hour and half feels like one!

VRFI: What would you want to tell the industry and users today? What’s lacking? What’s overdone? What’s overlooked?

HS: One thing that we’d like to see is more AAA developers start getting in on the VR action. Game companies with huge budgets and skills sets will certainly be able to make amazing products (but our hearts still lies with the indie scene that surrounds VR gaming and has built it up so strong). Another thing we’d like to see is VR games moving further away from being toys [and] closer to being actual games that don’t rely on VR to be a gimmick, but an actual mechanic. (We’d also like for people to stop putting “VR” in the titles of their VR games, because come on…).