Virtual reality analysts have been following HTC quite closely. HTC has become quite the trailblazer in the VR industry. The company is making power moves left and right. A recent FCC listing indicates that HTC has a Vive Fitness Tracker in the works.

VR industry insiders believe HTC is preparing its Fitness Tracker for launch. Companies typically test new devices in-house and then send them to the FCC for approval. The fact that an FCC listing shows a new device from HTC is an indication that the tracker passed through internal testing without flaw. Industry insiders anticipate the new HTC tracker will likely debut at some point in the next couple of months, possibly around the time of the Barcelona Mobile World Congress.

What We Know so far About HTC’s new Device

Some photos hit the Internet a few weeks ago showing what appears to be HTC’s Halfbreak smartwatch. The photos displayed a watch with a round display, a rubber strap and two buttons positioned on the right side. The rear of the device looked to feature a hart rate monitor. This is a common component of contemporary fitness trackers. The device also had the Vive branding to boot. HTC’s virtual reality headset is referred to as the HTC Vive. This nifty piece of technology hit the market last year. All of the evidence seems to add up to HTC’s new device being a fitness band compatible with the company’s VR technology.

It must be noted that the HTC Vive watch was spotted by a fairly obscure website known as TheLeaker.com. The photos included a blueprint showing the tracker’s general shape and elements. It appeared as though the blueprints displayed RF antennas that provide wireless connectivity and heart rate monitoring technology. Yet the question remains: why would HTC combine its product lines into one cohesive unit?  Some believe adding the Vive moniker to the new smartwatch will propel it into the mainstream simply because Vive products are quite popular.

As long as the new tracker functions in unison with virtual reality environments, it will likely prove to be a raging success. Perhaps HTC is working on a fitness program that allows users to traverse virtual spaces from home with the company’s headset while the smartwatch monitors heart rate and other metrics. Maybe HTC will make use of the tracker as a means of gauging one’s heart rate during frightening virtual experiences such as warfare simulators, zombie games, haunted house adventures etc.

Anyone who is interested in fitness and virtual reality should be licking their chops for HTC’s intriguing new device. If HTC is poised to debut a fitness band that functions with the Vive and motion controls, those who are interested in staying fit with the assistance of the virtual realm will be in heaven. Engaging in physical activity with virtual reality elements makes it that much easier to achieve physical fitness goals. It is assumed that HTC’s new fitness band will track user data in terms of physical performance. The headset will provide visually appealing and immersive virtual environments that make sustained exercise sessions much more bearable.

HTC has Remained Quiet About the new Device

HTC representatives have refused to comment about the alleged VR-based fitness device outlined above. However, those who track industry happenings are confident the company has quite the interesting fitness tracker in the works. 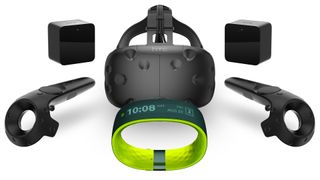 The general expectation is that this device will be available at some point in the near future. Many insiders expect HTC to shift the majority of its focus to virtual reality-oriented devices as the company’s smartphones weren’t exactly a hit.