One of the biggest issues that virtual reality as a platform will someday have to overcome is what I refer to as “the curse of player movement.” This curse is actually a complex array of issues that make it difficult and seemingly impossible for players to be tracked and move freely in VR. In other words, developers have been finding it extremely difficult to create control methods that use human locomotion as a way to move through virtual environments. This directly impacts and limits the types of games and virtual reality fitness experiences that developers can make. Most notability and ironically, first person games are the most impacted by “the curse.” Even though first person games and apps appear to be a natural fit for virtual reality they are not. Generally developers dramatically limit player movement to pre-chosen locations within virtual spaces and remove free roaming movement all together. This approach limits VR apps tremendously. To solve these issues, developers are creating a variety software and hardware approaches that allow players to move freely. One such approach involves the use of an omnidirectional treadmill called the InfinaDeck. Developer George Burger is developing this omnidirectional treadmill for a variety of VR apps, but the potential uses in virtual reality fitness may be where this technology will shine.

What is an Omnidirectional treadmill?

Getting the basics out of the way, an omnidirectional treadmill is not an exercise device although it shares similarities to the common treadmill that allows a person to move in any direction, allowing for 360 degrees of movement. Sounds simple enough doesn’t it? The truth is that this simple concept could be the linchpin to making VR fitness as real as your big box gym. 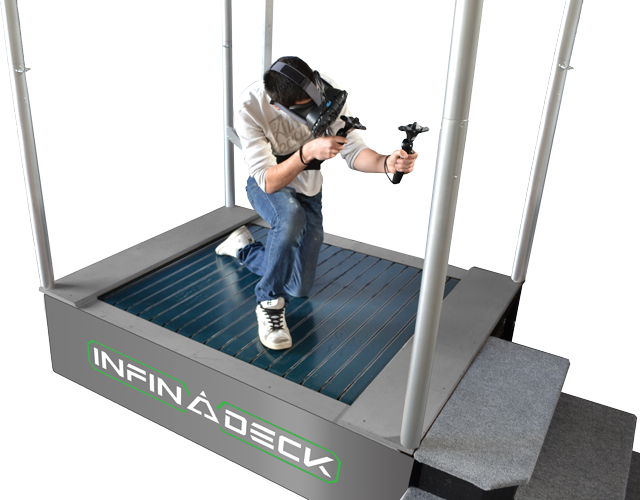 Omnidirectional treadmills are perfect matches for virtual reality environments for several reasons. First of all, they allow users to naturally move and navigate with their bodies while providing physical feedback. Second, by creating a control interface that works with user leg movements, users do not have to control their virtual movement with hand feedback systems (as is currently the case). Hand movements can be tied to other control systems. This will provide developers more flexibility and possibilities for creating immersive hand gesture controls. If fully implemented with all four appendages, the user will experience a complete haptic experience that will be far more immersive than current setups. What does all this mean to you? Full body impact from VR. See why we think it’s a big deal?

While similar tech is already out there, Infinadeck does bring a lot to the category. George Burger first introduced the prototype omnidirectional treadmill system at SVVR in 2014, and it has significantly improved since then. The first prototype that Burger introduced weighed in at 1000 pounds. The newest model introduced at last year’s CES conference weighs significantly less. At 500 pounds, this thing is not something you will want to carry around. That said, it is within the weight range of many conventional treadmills. The new version has a harness which will prevent users from falling off the treadmill while using a virtual reality headset. The harness also serves to keep users centered so the system can accurately track movement and relay results to virtual simulations. As to how it works, in videos, you can see that there is one big belt which actually consists of an array of smaller belts. Motors control both sets of belts to keep the user in place while also tracking the amount of movement they generate.

This system dramatically differs from other omnidirectional systems that are being developed. Cyberith and the Virtuix Omni are both attempting to reach the same end-goals with omni-systems, yet they do don’t use motors. Instead, they rely on frictionless slippery surfaces. The motorized approach should provide a more realistic sensation of movement in contrast to the slip and slides mentioned above. That said, there will be some limitations for games and for the fitness apps that utilize the Infinadeck. 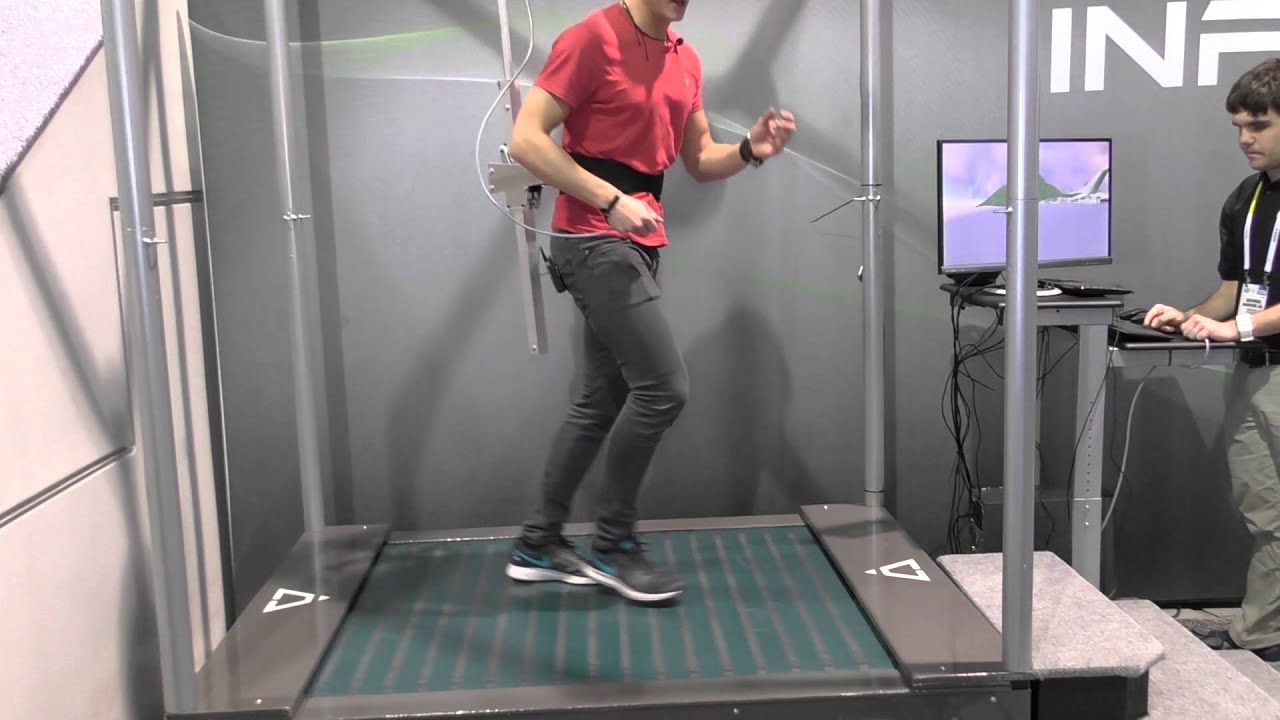 The biggest limitation revolves around the devices max tracking speed which is 6 miles per hour. This means, as of now, George Burger’s system tops out at a fast walk. On the one hand, fast shooting games will have to take a more modest approach to player speed. On the other hand, fitness apps will also have to be limited to tracking slower movements over longer time periods. This is not all bad news. As I mentioned earlier, omnidirectional treadmills greatly open up possibilities for tracking user arm movement.

With this in mind, users will be able to work out their upper arms and torso while on the move in virtual reality environments. Virtual reality fitness apps that embrace slow user movement and intense upper body exercise could work very well with this setup. For example, a virtual wood chopping simulation where users walk from tree to tree to chop wood could work perfectly. And anyone who’s ever done a woodchopper at a cable station in the gym knows that it’s a great exercise. Upper body strength and stamina could be gained if users held a weighed real world object that was represented in virtual reality by an ax. This is just one example.

Beyond chopping simulations, hardcore hiking simulators would work perfectly with such a setup. As long as the virtual environment was flat, users could be immersed while gaining an endurance cardio workout in a virtual reality world. To up the ante, such virtual hikes could be made more strenuous if users wore backpacks or the gameplay required them to jump, lunge or bend down to move around virtual objects. As to when the Infinadeck will be released, Burger is not saying. As of now, there are plenty of kinks to work out, and the overall size of the unit will still need to be reduced before it comes to the market.

Bottomline: The Infinadeck could potentially provide users will a full body workout if developers take advantage of this innovative system. In addition to engaging the upper body, the lower body and core will get a workout as well. While stabilizing themselves on the Infinadeck, users will be able to engage their lower bodies and cores at a moderate level of intensity. This will be more difficult for other non-friction based omnidirectional systems to achieve. That said, Infinadeck could evolve to handle high running speeds and thereby also augment high intensity aerobic virtual reality workouts of the future. We’ll keep watching the tech evolve and bring you the latest as it happens.