It has become very obvious that computer hardware manufacturing companies, including MSI and HP, are enthusiastic about the future of virtual reality. Most notably, these companies are aimed at delivering a VR backpack computer solution to help customers immerse themselves in the experience even further. What’s more, MSI proved that they don’t want to be wasting time, and presented their VR One backpack PC just a few months after officially discussing the matter and presenting their concept.

The company just debuted the MSI VR One Backpack PC at the annual Tokyo Game Show. What’s notable about the device is the fact that it weighs only 7.9 pounds and integrates nVidia’s 10-series GPU. 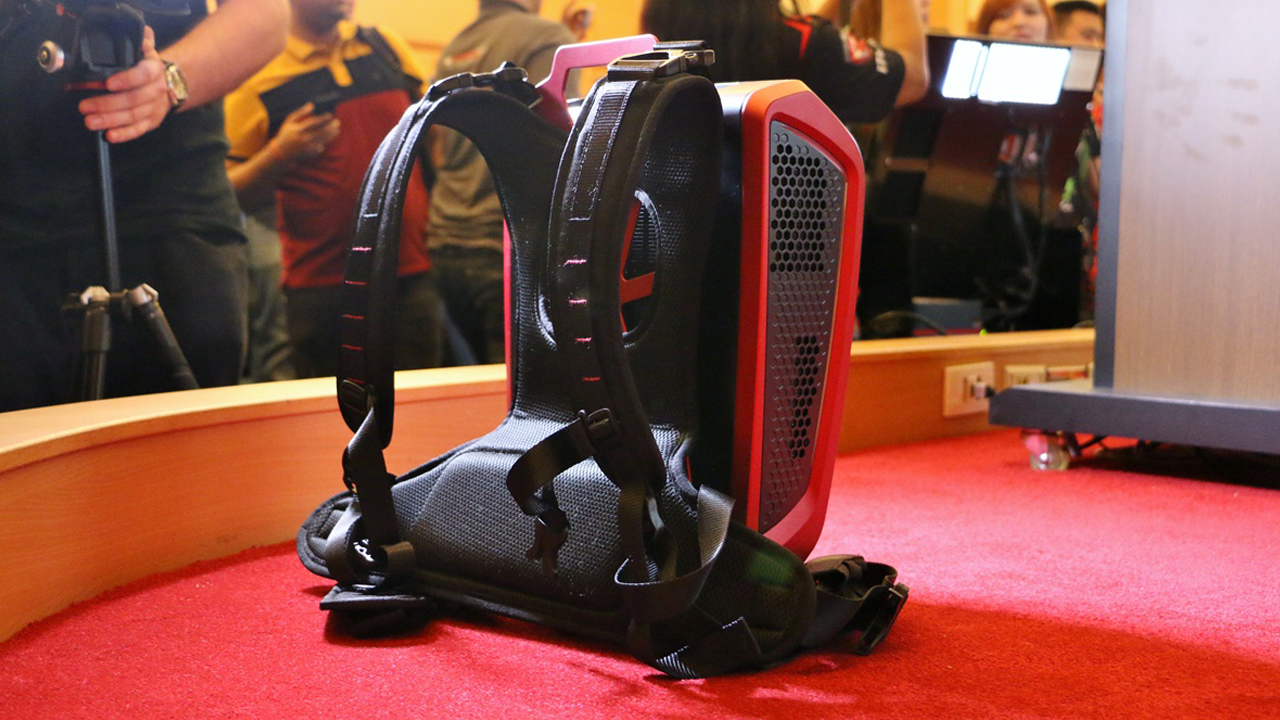 Ever since Valve and HTC debuted their Vive headset, enthusiasts have been saying that the only thing that truly breaks their immersion are the cables that connect the device to the PC. What’s more, with the VR headsets being tethered to the PC, one can’t truly achieve a VR fitness experience, as the cables further limit the movements of the player. While there are reports that wireless might soon be the solution, the technology we have today doesn’t provide us with a stable and fast enough connection for VR. The only thing that’s left to achieve an untethered and immersive experience by carrying your PC with you. As crazy as it might seem, this might be the perfect solution.

The MSI VR One Backpack PC manages to squeeze together a fully built personal computer in a neatly packed backpack form. What’s more, the VR One will be more than powerful enough for an amazing VR experience, by being powered by NVidia’s 10-series GPUs. The presented VR One prototype featured the GTX 1070. In order to be fully untethered the backpack PC will use hot-swappable batteries that will provide at least a half an hour battery life. MSI have managed to solve the battery life issue in their VR One Backpack PC by integrating a technology that lets you swap batteries without turning off the device.
MSI also closed the discussion on whether or not a fully capable VR PC would be light enough, by achieving a weight of only 7.9 pounds. While this might seem too much for a laptop, for example, this is nonetheless perfect for a backpack.

MSI didn’t go into further detail about the prototype they have presented at the Tokyo Game Show. And while their VR One Backpack PC prototype was the most finished product of its kind, other companies have also presented their VR Backpack PC ideas. For example, Alienware has announced that they are already building a Backpack PC that will pack the AMD Radeon RX 480 video card.

The MSI VR One and VR Fitness

While a full-blown workout would not be possible, having a consumer-ready backpack PC for VR is certainly an exciting idea for VR fitness. Being untethered, with the help of Vive’s Lightroom, people will be able to freely roam inside the virtual worlds achieving a whole new level of immersion. Nonetheless, having a computer on your back will certainly limit some of your ability to do extortive movements. The only true way this might be possible would be with military-grade equipment holding the VR Backpack extremely tightly strapped to your body. However, another issue will still be the fact that you won’t be able to lie down on your back, which is essential for many fitness movements. Another possible issue with this device would be heat. With heavy use, the temperatures of the backpack PC may become too high for a person to wear it on their back.

Nonetheless, it’s good to see hardware manufacturers so heavily invested in bringing us an untethered VR experience. While the MSI VR One Backpack PC is not certainly the solution needed for a full-blown VR fitness workout experience, it is the right step forward in giving more control and immersion to the player.

Have you got any insider tips about the world of VR and fitness that you think we need to know? Make a comment below and our editors will get back to you ASAP!