It all started with Super Hot and it has risen to fame as one of the must play games of the year. Developers have a tendency to want to replicate and modify current entertainment in order to get more fun out of it. Super Punch takes Super Hot to a different level of Hotness.

What is Super Punch?

Code. Well, Modding Code really. You can grab it on itch.io or ModDB because you have to manually mod your game in order to get this incredible fan-made addition. The mod turns the game from a sword and shooting game to a punch everything game in VR. This means you can punch enemies, but you can also punch bullets flying at you in the air and bounce them back towards the enemy. Additionally, it added the ability to move via punching, as in you punch and your character moves forward. Needless to say, this made a great addition to the modding community.

Why was Super Punch made?

There was a “Make It Superhot Game Jam” that focused on creating things surrounding Super Hot. This means you could have made some art, a whole separate game, or a mod, such as Super Punch. Prizes were offered to those that created the best fan-made creation and Super Hot was one of them. A lot was riding on the line since many of the prizes were $1,000+ in value, which meant nearly every creation added something unique to the pile of fan creations.

Why is Super Punch fitness related?

You are punching in order to move and punching is not something you should take lightly when you’re in the fitness world. A “missed” punch, or a punch that hits nothing but air, throws out a ton of energy. Go ahead and punch the air as hard as you can ten to twenty times and see how exhausted you are. Punching takes a lot out of a person and requiring you to punch in order to move makes a large impact in how much fitness a game can give. 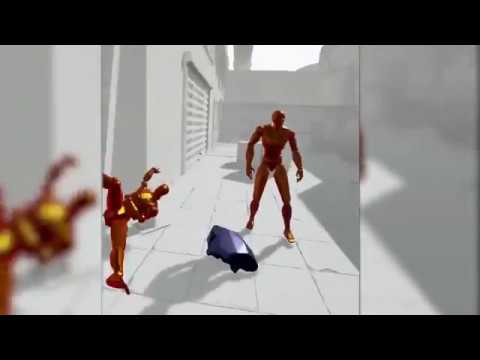 Another great reason to cover this is the new aspect of locomotion that this game provides us. The beginning solution to locomotion in the game world versus the real world was to just modify a treadmill. Even the Katwalk was just a highly specialized treadmill, which is a poultry idea when you are trying to extend VR to everyone. However, by allowing a player to use in-game mechanics to move with the controllers while also providing actual movement you allow access to locomotion to anyone with a headset. This is a great idea that seems to be spreading amongst the VR games with the motion of the swinging arm being the most common and prolific one among them.

The only issue with this type of locomotion is that it doesn’t encourage leg movement, which is what your body wants to do in order to move. This would still require the treadmill and this is still a problem for many people out there, but, at this point, many would agree that this is an improvement over just teleporting to a location. Teleporting causes you to break away from the reality of the game and this can interfere with what you’re trying to do with the game. Super Punch was a great mod and a great example of what can be done when you include the ideas of the community. VR is a community project, not a corporation’s project. The community decides what will be useful and what won’t be, which is how Super Punch came to exist.