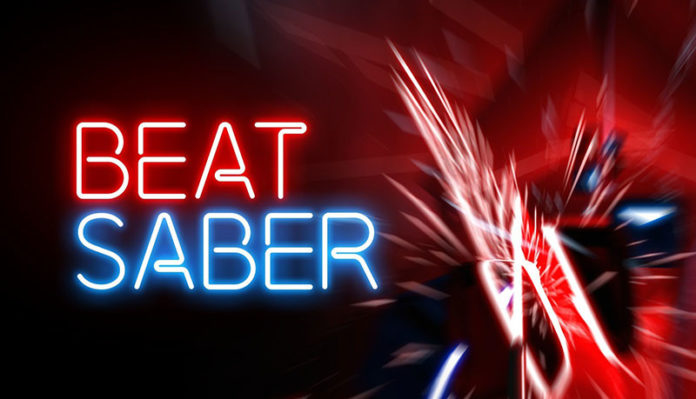 Moving to musical beats and dancing to the rhythm is something people have been doing since the dawn of time. Rumor would have it that a caveman’s first tools were for fire, weapons, and music! Technology continues this tradition with games like Beat Saber, a VR rhythm game created by Hyperbolic Magnetism, a studio based out of the Czech Republic.

Beat Saber is a rhythm-based VR game where players pick up their Vive, Oculus, or Windows Mixed Reality controllers like a Jedi Samurai warrior hitting directional cubes to the beat of some fired up music. Slice and slash those boxes high and low, right and left, up and down, but don’t plan on standing in one place for very long — Beat Saber is a full body workout that also has obstacles that make you duck and dodge.

When news of Beat Saber’s upcoming release hit the internet, most compared it to be the Guitar Hero of VR games or being the next Fruit Ninja VR because of the slicing motions. We play rhythm games on the regular and love BOXVR, Soundboxing, and Audioshield; but we’ve got to tell you that Beat Saber is a whole new class of rhythm game. Replace the orbs with directional cubes and turn in those boxing gloves for some futuristic neon red and blue lightsabers. It’s about to get challenging and a whole lot of fun!

If you’re looking for a physical and mental challenge that’s going to immerse you in a cutting edge and music inspired workout this game’s for you! Beat Saber has a range of gameplay modes like easy, normal, hard and expert to keep your VR fitness playlist fresh and will leave you feeling empowered!

The VR Health Institute tested Beat Saber and said it burns between 6 to 8 calories a minute and is compared to the intensity of game of tennis.

I used the HTC Vive for this review and tracked my heart rate and calorie burn with my Apple watch and exercised for a total of 35 minutes.

I’ve been playing this game for a few days getting used to the songs and game mechanics so I would be able to play a solid 30 minutes without downtime.

Beat Saber is a game that packs fire behind a whirlwind of saber movements. The directional cubes are the essence of the beats, so if you hit them correctly your score will climb with multipliers as your upper body, core, and lower body get a workout by reaching and striking cubes and getting out of the way of obstacles with lateral movement. This game can be used for cardio and conditioning workouts, as well as for warm-ups and full-on workouts.

Here are the results of my 35-minute workout: At the end of my workout, I was a sweaty mess and needed to cool down.

Players stand on the platform and use their arms, shoulders, chest, and back to quickly coordinate and slice their beat sabers at directional cubes. These cubes tell you to hit up, down, left, or right and will come down the platform at different heights.

Tip: Do not lightly swipe at the boxes and patterns, really put some effort behind those moves like a real Samurai drummer.

Note: The first day I got the game, I played for about 3 hours getting used to it. At the end of the day, my shoulders were sore so be careful not to overdo it right out of the gate.

There are walls that come streaming in low or at the left or right from the center to keep your legs moving. The low walls will push you to squat quickly and the left and right walls will make you side shuffle or side step to keep you from being hit. By the end of my workout, my legs were burning.

Squatting low to slap red and blue sabers at their coordinating cubes before they flew by exercised my core muscles when I tightened them. Cinching in the core stabilized my posture and also helps prevent back strain from slouching.

Moving side to side in a fast paced hustle tested my coordination and balance, but I didn’t feel off center at all. In most of the songs, there are cubes that come whizzing at you a little higher than the others, making you stretch for them and working your core.

With 10 songs to pick and play through at various levels of intensity, Beat Saber is a game that I’d replay as many times as it takes to get better at mastering hitting directional cubes at a fast pace. This game is a nice change to other rhythm games and the music is really good. It’s so easy to jump in and start rocking out. I gave the game a 7 for replayability because there is a lot they could add to make the game even more replayable. Example: Unlocking different levels, add multiplayer, add streaks in the game that give extra points as you play, very much like Guitar Hero.

Beat Saber can be used as a warm-up or as a full body workout due to the difference in intensity levels. The game has you moving around swinging your arms, moving from side to side and ducking and squatting.  If you get in the groove this game will have you sweating in no time.  The key is to move a lot, over exaggerate your swings and just have fun. Don’t stand there like a limp noddle and flick your wrists.

While playing Beat Saber I shuffled and sidestepped, squatted to slash at low boxes, and reached up to meet floating ones. I felt great and didn’t feel nauseated at all. It’s set on an unmovable platform with zero simulated inertia that mitigates motion sickness.

This is a single player game as it is currently and does not have PvP or multiplayer competition modes like how BOXVR has set up their group multiplayer. It does have a leaderboard which is cool to see the other players scores and I did find myself trying to beat my friends best scores.

Beat Saber is a fun game that gets you moving in all directions. Playing the game on high or expert levels will give you the biggest bang for your workouts. The songs are good, upbeat and make you feel like a bad ass when you master the levels. Beat Saber is also a game that can deliver a solid workout if you give it you’re all. This game is a must to add to your VR workout routines.

I wish there was a playlist option so I could queue up the songs and in what order I wanted them in. That would eliminate downtime in between songs. Also, it would be amazing to be able to play your own music library with Beat Saber. Hopefully, that will be an add-on someday. Lastly, to make this game purely amazing, there need to be incentives in the game that makes you strive to play more. Unlocking new songs, unlocking different levels, adding PvP or being able to challenge your friends could add a lot to the replayability of the game.

Make sure your controllers are secure in your hands (Use the string tie). You don’t want to accidentally throw your controller through the TV or monitor as you are rocking out.

Remember when the Nintendo Wii first came out?

Now with all that said, go out and get Beat Saber and add it to your VR workouts! You won’t be sorry.