Workout games in VR have a certain vibe to them. Usually, they’re given to us in a rhythm style or maybe in a melee combat styled game. As VR searches for new and exciting ways to engage people with games though, more real life scenarios have become subjects that VR can tackle. In the case of Crazy Kung Fu, this is just that situation. It’s the first game of its kind that aims to teach you a life skill in VR. While you can drive cars in VR and various other activities, rarely do they actually feel real enough to put into practice in the real world. With Crazy Kung Fu though, things change and this can really become a teaching tool. Crazy Kung Fu is pretty straightforward in its presentation. You’re given a quick tutorial on how everything works and luckily it’s pretty obvious on how you do everything in the game. There aren’t endless menus to learn about or unique physics to happen, but you do need to realize how sensitive the physics at play are and just how hard you’ll need to be punching these boards that come at you. There is an impressive system at work here and just merely tapping the wooden blocks coming your way will do little to nothing, you’ve got to really punch in order to get the desired effect. The physics are on point too, so there are no shortcuts to be taken here.

Crazy Kung Fu made me feel like I was being trained in something I had no clue about. I found the gameplay loop to be extremely simple, but very addictive in its execution. You go through various different sessions where you have to destroy several boards while ducking blades and blocking the appropriate blocks. It’s an incredibly fast-paced experience that can leave you breathless even on the easiest levels and I quickly found myself engaged in mastering the 3 techniques as best as I could. The amount of content isn’t huge, but what’s there is a very different take on VR simulator and I could see this genre becoming more popular with games of this type. I don’t know if my training would pay off in a real-time combat scenario, but it definitely was a full-on test of my reflexes for sure. There was a sizable fitness aspect to Crazy Kung Fu that really got the blood pumping more than most VR games. You should know going in that this is much more of a training simulator than a full-on gaming experience, so keep that in mind when making your purchase.

The ability to have your scores tracked as well as your physical improvement is a pretty strong case to keep you coming back. Much like you might incorporate Beat Saber and Blade and Sorcery into your daily VR workouts, Crazy Kung Fu can be slotted in there as well as the all-out physical experience you get from it is something to truly be reckoned with. It’s not the most varied experience out there, that’s for sure. But much like attending a martial arts class would be, repetition creates mastery, and as good as this game is at creating this vibe, it’s also a bit grating after a while, so without some more variety to the Kung Fu in question, there will not be a ton of longevity here outside of the exercise aspect.

Crazy Kung Fu is deceptively needy in terms of space. I can’t tell you how many times I accidentally crashed into things while playing this game. It was mostly due to dodging the ever-spinning blade of doom that comes at you each round, but I found myself needing a solid 5×5 space at minimum in order to play this one without collateral damage. It’s doable in a smaller space, but you need to be very careful with how you’re moving about especially at the speed you’re going to be moving and swinging your controllers.

I recorded my 30-minute workout with a Fitbit and played on an Oculus Quest 2.

Crazy Kung Fu lives up to its name in every way. This experience is unbelievably intense and not only in physical stress, but difficult as well. I might suck at Kung Fu, but I was hard-pressed to even get past the first few levels here as the threshold for failure is very short and even the smallest mistakes will send you back to the start screen. You will be feeling this one the next day if you’re actually playing correctly and I can’t think of too many other cardio experiences like this in VR. It can be used as a staple in any VR-based workout. Please stretch before entering the virtual dojo. While most games use your arms in VR, few have the pace and dual-armed approach that Crazy Kung Fu employs. The speed at which you need to switch from punching to blocking with each hand is pretty high, so you need to be fully stretched out and ready to go when you start as it can be very easy to pull a muscle during this game otherwise. While you’re not going to feel any resistance for your punches, there is haptic feedback letting you know how hard you’re hitting though and that’s important because these boards do not break unless you’re using some legitimate force with your punches.

Unfortunately, your knowledge of kung fu here will be restricted to your hands. Despite being ripe for a full-body experience, that’s not the case with Crazy Kung Fu. Your legs do come into play in other ways though, namely being used to duck out of the way nearly constantly during the different rounds. The blade seems to come at you at different heights too, so feasibly you could be getting into the lowest squat you can handle just to dodge these hazards. The game doesn’t explicitly require your legs to be used though, so if you’re not that dedicated, some head ducking should be enough to get out of the way of the hazards on each level.

When you’re in the heat of one of the challenges, you’re going to need to do everything in your power not to fall over here because that spinning dummy of death is an intimidating prospect indeed. Getting your footing is everything here though because you need a solid base to be able to accurately hit the boards enough to destroy them as well as being able to block effectively. In terms of your core, you’re going to be engaging it quite a bit here as the punches you deliver require some decent force and for anyone that has experience in martial arts or boxing, you know that your body twist plays a huge part in the power you generate. 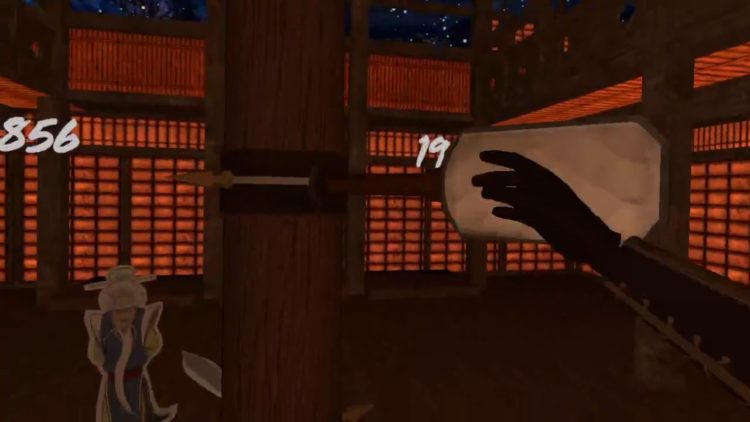 Some VR games have the tendency to make you forget your place in time and just envelope you in a world wholly unlike your own. Crazy Kung Fu has no interest in creating this type of atmosphere though as the environments you’ll be training in vary only slightly from level to level, with nothing really approaching an immersive experience visually. Instead, though, the workout experience on its own will have you forgetting the time ticking away in the real world. You aren’t meant to spend a ton of time in Crazy Kung Fu each day though, it’s the type of experience that’s best experienced in short bursts, if only because you physically won’t be able to handle much more than that. 30 minutes seemed to be the perfect amount of time with this one if you’re playing with all the features enabled, slightly more if you’re playing with handicaps on. As any workout is by its nature, Crazy Kung Fu comes with a certain degree of repetitiveness that can definitely grate on you if you’re not into it from a particular workout perspective. Assuming you’re here for the physical element though, this is a wonderful workout to throw into your daily routine. It’s not the most varied currently in terms of gameplay, but that’s not an issue when the content available is so damn tough, that you will probably struggle to see it all anyway. The challenge alone will have you coming back for more every time the spinning dummy of death forces you to restart the level and the replayability lies in your desire to conquer or be conquered. While there aren’t tons of different difficulty modes as of yet, there are ways to scale the workout you’re getting within Crazy Kung Fu. First off, playing sitting down will greatly decrease the workout you get here and you might only find your arms and possibly your core getting any sort of workout if you try to play it this way. The other way you can change things up a bit is with the customization options. Here, you can decide whether you want the full experience or the more tapered one. You can decide to do away with some of the obstacles coming at you and while this makes for an easier experience physically, it most certainly does not make for a more fun one. Taking away the blade that you must dodge pretty much cheapens the whole experience and although the full experience is incredibly tough, it makes you genuinely earn it comparatively. At first glance, there doesn’t seem to be a lot about Crazy Kung Fu that could cause any dizziness or nausea to take hold. However, once the action starts moving, things are spinning at you at high speeds and as you navigate your play area, you might find yourself off balance more than a few times and just this alone can cause a little bit of an uneasy feeling while in VR. Luckily, you can tone down a few of the obstacles if this gets too overwhelming for you, so you can alleviate any nausea you might be feeling initially using this method.

Currently, there is no social multiplayer component to the game as of now, but this is still in Early Access, so there is the possibility that a type of multiplayer may be implemented in the future as well. You can track your scores as well as the calories your burning too, so there is already some interconnectivity being shown here.

Crazy Kung Fu is an excellent workout that introduces a unique way to learn martial arts within VR. It’s a simple setup, but it’s effective and gets its point across cleanly without wearing you down with too many tutorials or anything like that. The physics are great and gives you the feeling of training in Kung Fu. While actual Kung Fu enthusiasts might critique the lack of depth presented here, for those just looking to learn the bare basics, this seems like a nice place to start out. It’s only in Early Access, so there is likely a lot more to come here and I’m looking forward to seeing how this game grows.

There is not a ton of different types of gameplay here to experience, so if you’re looking for a full-fledged gaming experience, this probably isn’t the best place to find it. You need to be prepared to train as a martial artist here, and that means repetition, patience and preparation. It’s very much a workout more than a game and despite the different levels or the rising difficulty, you can never shake the feeling that you’re in class at the moment and that is enforced by the virtual teacher that accompanies you.

Crazy Kung Fu is available on Steam and Sidequest and the Oculus Store for $9.99 and playable on Oculus Quest 1 and 2, Oculus Rift, Valve Index, HTC Vive, and Windows Mixed Reality Headsets.