I know what you are thinking. “Oh look another Rhythm Game in VR”. While that genre seems to be one of the more popular if not market saturating, Ragnarock stands out on its own. Ragnarock places you at the helm of a Viking Longship. You play the role of a Viking Drummer beating the drums of the ship to encourage the crew. Old Norse Runes move down over the drums and you swing your large hammers to the beat of the music.

The more accurate your timing, the better your crew will perform. If your timing is perfect the drums will have small flames rise from them. This “charges” your Hammer and chain enough perfect hits together to be rewarded with a “combo”. Keep making perfect hits and your combo will grow more powerful. Then you will have a chance to bang on a shield found on your left or your right, and the crew becomes more powerful, giving you a boost in speed.

I have played a lot of Rhythm games and the reason Ragnarock stands out for me comes down to the music. For reasons that elude me the familiar names such as Beat Saber and Synth Riders do not do well with Metal music. Ragnarock was made for Norse, Celtic, and other Folk Metal genres. With bands like Nanowar of Steel, Gloryhammer, and Alestorm to name a few. The Developers intend on adding even more bands, and of course, it is possible to add your own custom music as well.

Ragnarock also has a competitive multiplayer mode where you race other Viking Long Ships. This will bring you back for more and for me made it even more entertaining. It is one thing to compete against a leaderboard it is quite another to race a ship in real-time. If you don’t feel up to the challenge, you can race against yourself. The game will spawn a ship next to you that is a “ghost” of your best time.

I played this using my Oculus Quest 2 with a VR Cover, although it is a PCVR only title, I used the wireless link. To track my fitness progress I use the YUR Fitness Tracker. I would recommend giving yourself some space to move, the drums are close enough but in the heat of the moment, I find myself moving more than I thought I would. Also, be sure to stretch and drink water! Ragnarock on the outside seems like a fairly easy game in terms of a workout. Sure you can stand there and barely move and be able to hit drums to the beat. However, if you allow yourself to get lost in the music and immersed in the world. The Multiplayer will push you to work harder in order to win and that is an added plus. Depending on the song selected and the difficulty level the intensity level can vary. I tend to pick the most intense songs as possible and really get into them as much as possible. The game makes it very easy to forget it is a workout. For your sake, for your crew’s sake, and for Odin’s sake you better make sure to stretch your arms. The drum beats on many of these songs are pretty intense and the more you get into the music the harder and faster you will wind up swinging. Since it’s Virtual and not real drums, you can swing right through them. There is no “Right or Left” in terms of you have to hit a rune with left or right. This gives you the freedom to play how you want. Don’t be shy or afraid of the harder difficulty, because the game will not fail you. Just be prepared to be swinging like a Berserker.

As this game is centered around you beating war drums, you won’t really use your legs often by default. Since I was playing with the intention of getting a workout, I would dance, jump, and lunge to get more for my effort. Not only did it make it more fun I found that my scores would increase the more I moved. The drums are just far enough apart that at times it just works out better to hop over!

Now this one is a bit tricky because by default there really isn’t a lot that engages the core. However, what I found was you can change the height of the drums and the angle of the hammers quite easily. I placed the drums low and this would require me to bend my midsection in order to reach them. You can engage and flex those core muscles while swinging and found it to be a fairly moderate core workout. This was discovered by mistake and after an hour of playing with the drums lower and me bent slightly over I finished and found my abs were feeling a little bit of the burn. It was not at all hard for me to lose track of time when I was playing Ragnarock. For as simple as the mechanics are it’s surprisingly easy to get lost within the game world. The music propels you forward and keeps you constantly engaged. I would often repeat the same songs over and over with the intention of betting my score and moving up the leaderboard. Some of the songs are close to 5 minutes long and I found myself enjoying them more as they kept me in the game longer. Every time I open the game I will play until the sweat becomes a problem, look at the time, and be blown away with just how long I was in Ragnarock.

You will come back to this one, time and time again. I feel like having an appreciation for Folk Metal helps but I also feel that anyone can find the same level of love with this game. Racing against yourself and the leaderboards appeals to people that want to be the best and greatest of all time. The Leaderboards are also shared on their website for everyone to see, which ups the ante. Of course, the Multiplayer ability is a strong driving point to many repeat trips. There is nothing quite like trying to race against multiple ships at once with the music blasting and drums pounding. Being able to add your own custom music is a great addition as well. (Not Available for Multiplayer or Leaderboards) 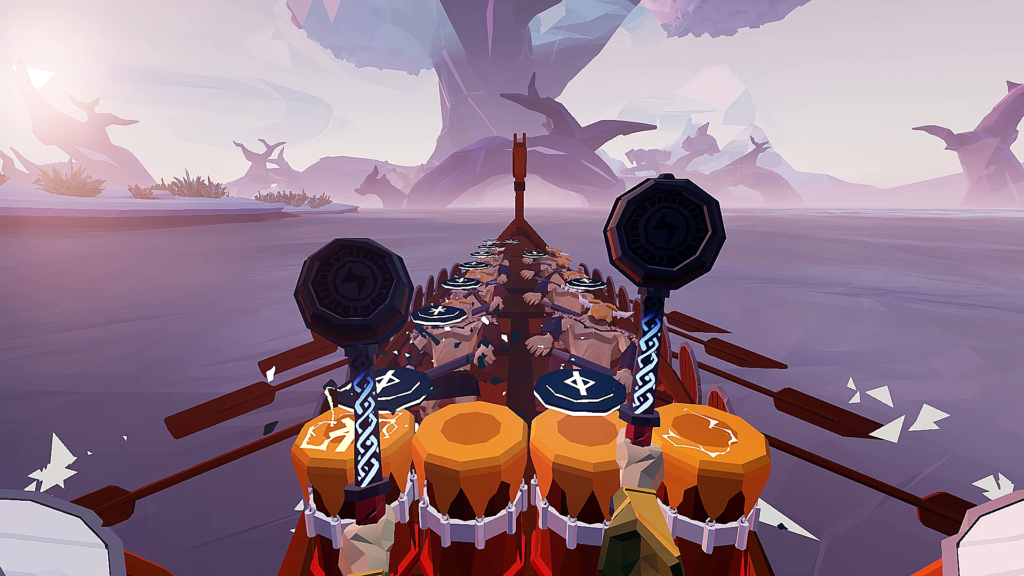 On the surface, the only choices you have are changing the drum height, hammer angles, and the difficulty of the songs. This leaves you on your own to find ways to increase or decrease the effort on your part. The game is in early access and I expect there to be changes in the future that will allow for more variety.

Ragnarock requires very little character movement. You, the player, may move about on the bridge of the ship within the confines of your playspace. There is no locomotion. You are focused with your eyes forward looking for the runes to hit on time with the beat. While you are on a ship, the winds are fair and the seas are fallowing. So you will not experience any VR Sickness in Ragnarock. Most rhythm games focus on the high scores, and Ragnarock would be no different. What makes it FEEL different is a simple fact, the scores are translated into the speed and distance the ship is traveling. So you have a visual representation of the other player’s ships, and either you are leaving them in the dust or desperately trying to catch up. There are multiple ways to approach winning and stringing combos for as long as you dare without mistake can make it extremely heated and intense.

In a world filled with VR Rhythm games, Ragnarock delivers with a heart-pumping metal soundtrack. FINALLY, a VR Rhythm game that embraces Folk Metal! The gameplay is engaging and the setting makes for an enjoyable experience all around. Working out without knowing you are working out is paramount to me for VR fitness and Ragnarock excels in that area. The gameplay is simple, and anyone can pick it up instantly. It will take time to master and plenty of sweat. The developers have delivered a superb product and I feel that they deserve a lot of credit for their efforts. I had not noticed any bugs personally and so far the game has been patched fairly regularly since its release. For an Early Acces, VR Ryhtm game I am floored with how well it plays.

Honestly, there isn’t really anything I would consider bad. The game is in its infancy and maybe a few extra features would be nice. For example, an easier way to add custom songs or the ability to create a playlist would be nice. Perhaps a game mode where you can play multiple songs in a row as an endurance race. That is not really a “bad” as much as “a wish list” item.

Ragnarock is for me one of my favorite ways to move and burn calories in VR. It’s a great game and I cannot stress enough the support the developers deserve. With a $19.99 price tag on Steam, it’s a steal.