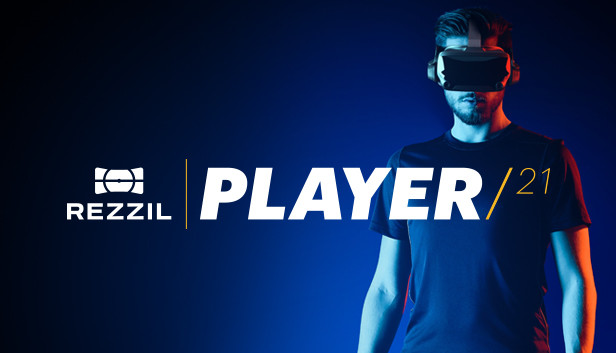 Despite being the most popular sport in the entire world, we have never gotten a true Soccer game in VR. You have to think that the reason for that is partially because of the tracking limitations of most VR headsets, but the other reason has to be that the consistent movement in a game like soccer would be hard to replicate in smaller spaces that most VR gamers have at their disposal. Rezzil Player 21 remedies that by focusing on the scoring and passing parts of soccer instead and in doing so, gives us a really fun free to play experience that is also a glimpse into what the future of VR Soccer games might eventually be.

Rezzil Player 21 throws you into the world of Soccer feet first by, well, first calibrating your feet. This is a simple process but for most who haven’t ever had their legs tracked in VR, this is a jarring experience that takes a bit of getting used to. Getting the height correct relies mostly on your tracker’s positioning and luckily you can get that done while the game is on without having to constantly back out into Steam VR in order to finagle it. You’re then given a choice of a few different types of modes to play in. You’ve got endless mode, where you can dribble, shoot and generally just mess around in the virtual soccer world to your heart’s content, finishing challenge where you are timed to score as much and as you can in intervals of 30, 60, and 90 seconds. There is also a color combos mode that requires an actual purchase of the game to access, but in return provides you a drill taken straight from the pros. The feeling of having your feet be a fully active part of VR now is something that took a few minutes to get used to, mainly because It’s tough at first to time things properly like you would in real life. For example, in actual soccer, you’re not going to be looking down at the ball when you’re taking a shot, at least that’s how it is for most players. Here though, because the tracking isn’t the most precise thing in the world you’ll need to occasionally glance downward to make sure your feet are properly positioned. Once you actually figure it out though, it feels fantastic and it’s not just some random arcade sports experience, this game is based heavily in physics, and your actual kicking power comes into play. I tested different strengths for kicking and each one resulted in a different velocity shot. To add to this, your shot direction is affected by the area of the ball you hit much like in real life. I found it slightly difficult to temper my shot power at times though as much like how in VR boxing games there is no solid object to resist your punches, there is no actual ball to resist your kicking. Because of this, be very careful when playing as you could easily hurt yourself trying to blast a ball into the upper corners for a goal.

What will Keep you Playing?

Rezzil Player 21 is currently an Early Access game and luckily for us, that means it’s completely free aside from the DLC. The initial offering is plenty fun and a great way to keep your soccer skills sharp during the harsh winter. There are tons of unlockable cleats and balls as well and these are a solid incentive to keep upping your high scores. This is also the only game of its kind in VR right now as soccer simulators aren’t exactly in excess at the moment. It’s incredibly ambitious and has been marketed as something that actual soccer players and coaches have been using to train around the world and that’s a huge endorsement for an Early Access game as it usually means that heavy support and additions are likely on the way. While you can’t really get the full motion of a soccer game in VR, this is a fun way to jump into the sport in your living room.

Unlike most VR games, Rezill Player 21 will require a few feet in front and to the side of you in order to play it properly. A massive playspace will do wonders for this game, but that’s likely not the case with most people so just try to clear a little area in front of

You won’t be burning the calories a ton while playing Rezill Player 21, but that doesn’t mean the experience isn’t intense. As you seek to beat out your best scores and become a more accurate scorer, you’ll need some serious leg endurance to keep up with the timers, and eventually, you’ll be switching it up as to not get exhausted too quickly. I have not experienced the color combos DLC, but that looks to be even more of an intense experience using actual drills that the pros use. The best part of the game is you can play at your own pace with the free mode allowing you to dictate just how much you want to put into it and get out of it. While your arms are generally not a part of the game of soccer at all, they are still involved for the simple fact that using your legs with no arm movement would result in some very awkward movement. Because of this, it’s best to have a couple of feet in front of you so you can actually drive into the kick like you would playing actual soccer and this requires an arm pump or two to properly get into. It’s not going to build the biceps or triceps, but it will keep them stretched and active during your time playing Rezill Player 21. Hope you stretched beforehand because any soccer player will let you know that it’s among the best leg workouts you can get and even though you obviously aren’t going to be sprinting across the pitch or jumping up for headers and going for slide tackles, you’re still in for quite a leg workout as the finishing challenge will put your leg strength to the test, and it’s very easy to have both your legs feeling a bit sore after this one if you don’t stretch properly beforehand. You might also be needing to bend your knees more often than you’d think during VR because it’s tough to get the foot tracking perfectly while going for shots. Core comes into play in a big way in soccer. Your entire shooting and passing strength comes from your core as that’s what drives the torque your body needs to perform these maneuvers. In VR, it’s a bit lessened, but still incredibly important. Each shot will have you engaging your core in multiple ways and the bigger your playspace, the more of a positive effect you can get out of this. Just dribbling the ball in the air will be a solid core workout as well although there is no real need for this in the game outside of creating your own fun. There isn’t a ton to do in Rezill Player 21, but that’s okay because if you love soccer, you’re going to be fully immersed in here and the finishing challenge is an endless source of fun as you compete against yourself to beat your own high scores. The environments are pretty authentic too and it’s easy to feel like you’re really practicing in real life after a while which is a great way to tell if you’re doing something right in VR. It’s not a game made for lengthy play sessions as you’ll eventually tire, but in 30-minute bursts, this is the perfect way to get a leg workout in. If you play any sport, you know that there is a certain degree of replayability to it all and that’s despite the inherently repetitive nature you’re likely to encounter while playing it. With Rezill Player 21 it’s the same deal and maybe even more so because of the limited amount of modes available at the current time, but because of its unique position as one of the only VR games to really use your legs at all. With the state of the world currently, it’s hard to get actual soccer games going so this is a solid second option at the moment and it keeps your skills sharp while offering you a glimpse into the future of VR sports training. Because of the Early Access nature of Rezill Player 21, you’re not going to have a ton of modes and difficulties to really be able to scale your workout. The way you’re going to do that is by selecting the different times for the finishing challenge. Each one brings on more challenges than the next, so if you’re looking for an incredibly intense workout, then go for the high score in the toughest option and you should see some cardio results. Another option to amplify this is to wear ankle weights while you play, though don’t go crazy with these as they can cause injury if used improperly. I felt nothing dizziness-wise while playing Rezill Player 21. The action is controlled solely by you, so no artificial movement takes place that will cause motion sickness for you. The colors are pretty basic too, so nothing overwhelming except the green of the field and even that is fairly low intensity. What might make some people a bit dizzy is having the balls launched at them, but you’re likely expecting that going into the game, so that really shouldn’t impact much. The feeling of your feet being tracked is also a little bit unorthodox feeling at first and it’s definitely important to make sure your trackers are working properly or else it’ll feel difficult to him shots accurately.

As of now, there is no multiplayer aspect to Rezill player 21, but this is still an Early Access game, so the possibility of the developers expanding on this to have some type of leaderboard to compare with others online is possible.

Rezill Player 21 brings the world’s most popular sport to VR for the first time for the zero cost. The mechanics are surprisingly well-realized despite utilizing the somewhat glitchy foot tracking systems that VR provides right now. The physics are excellent and if you really strike a ball truly, you will see that thing rocket off your foot just like you would in real life. There are tons of unlockable cleats and balls to keep pushing towards a new goal each time you play. While there aren’t many modes available, the Early Access model alone shows that there is a ton to come from this game and the developers having the backing of actual soccer players and coaches means this will get the support it needs to become something special.

If you’re looking for the full soccer experience, it isn’t really what you’ll be finding here as this is more of a shot training experience rather than giving you the full gamut of a soccer game. This isn’t FIFA VR, so don’t go in expecting that. There are only 2 modes available for free, with the third and most impressive one being available as purchasable DLC.

Rezill Player 21 is available on Steam for free and playable on HTC Vive, Valve Index and Oculus Rift, and Windows Mixed Reality Headsets through the use of KinecttoVR.