“Oh, there once was a hero named Ragnar the Red, who came running to Whiterun from ole Rorikstead. And the braggart did swagger and brandish his nerd as he told of bold battles and the calories he burned.”

It is official! Skyrim VR has been released for the HTC Vive and Oculus Rift and the world will never be the same. While most articles will point to the amazing modding community, the new frontier of the story-based VR or the incredible feeling of being inside Skyrim gazing at the sunset we’d like to bring attention to the massive implications this newly ported 7-year-old game has on the fitness world.

You heard me right! Put down the sweet roll and pull the arrow from your knee. Today we’re reviewing my new personal favorite fitness game: Skyrim VR for the HTC Vive. So let’s get the head-scratcher out of the way. How is Skyrim VR a fitness game? The short answer is, it’s not. But here’s the kicker. Skyrim VR is a fully explorable map with miles of roads to traverse and a free motion option which allows you to float your way through a massive open world.

I realized after purchasing the game that I was standing for hours. That by itself is better than sitting but I got a sudden idea. I turned off room scale, I placed a mat in the middle of the room and I made a couple rules for myself.

This took some getting used to and for the first minute or so it felt pretty silly. Then something magical happened. I played for 4 hours (only stopping to take small breaks) and decided to check out my Fitbit app. This is what I saw: For those not familiar with Fitbit, I did not burn 3,776 calories in Skyrim. More likely 1,200-1,800 as it also includes Basal Metabolic Rate (BMR). But let’s think about that for a moment. Not once did I think to myself, I’m tired…this is boring…I want to go home. My only thought was, I need to take off the headset for a few minutes so I can keep playing.

Looking to Reddit and finding others reaching similar results it dawned on me…Skyrim is a new way of working out. Not once did I want to stop and not once did I get foggy sweaty lenses. In case you’ve never played or heard of Skyrim VR here’s a quick trailer before we move on:

Normally when we do game reviews we do 30-minute tests. Skyrim is not particularly great for a 30-minute workout nor do people typically play for 30 minutes. Skyrim is a low impact cardio workout that can be done for hours at a time without causing fatigue. So without further ado, here is a review of a 60 minute Skyrim VR workout session.

The VR Health Institute has not studied Skyrim VR, and there’s really nothing in the VR world for us to compare it to. Instead, let’s compare this workout to what it really is: Jogging in place. For an average man my height (5’9) and my weight (150ish) I should burn around 340 calories at a simulated jog of 4mph.

To reiterate, I placed a mat in the middle of the room, turned off room scale and measured my activity with the Fitbit Charge 2. For the purpose of this test, I ran from Whiterun to Dawnstar to Markarth and almost back to Whiterun. I tried not to fight too much but with a civil war raging…I mean come on…my country needs me.

If we were talking about the intensity of the immersion, Skyrim would rank as an 11/10, but we’re talking about physical intensity. For that, jogging in place is not physically demanding. That is the beauty of this workout. Anyone can do this and while doing it you won’t even realize you’re working out (until the next day.) While games like Thrill of the Fight are extremely intense, no one can sustain continued shadow boxing for 4 hours at a time (maybe Conor McGregor.) So though Skyrim ranks low in physical intensity it gives way to a unique low impact cardio workout you can do for hours on end. 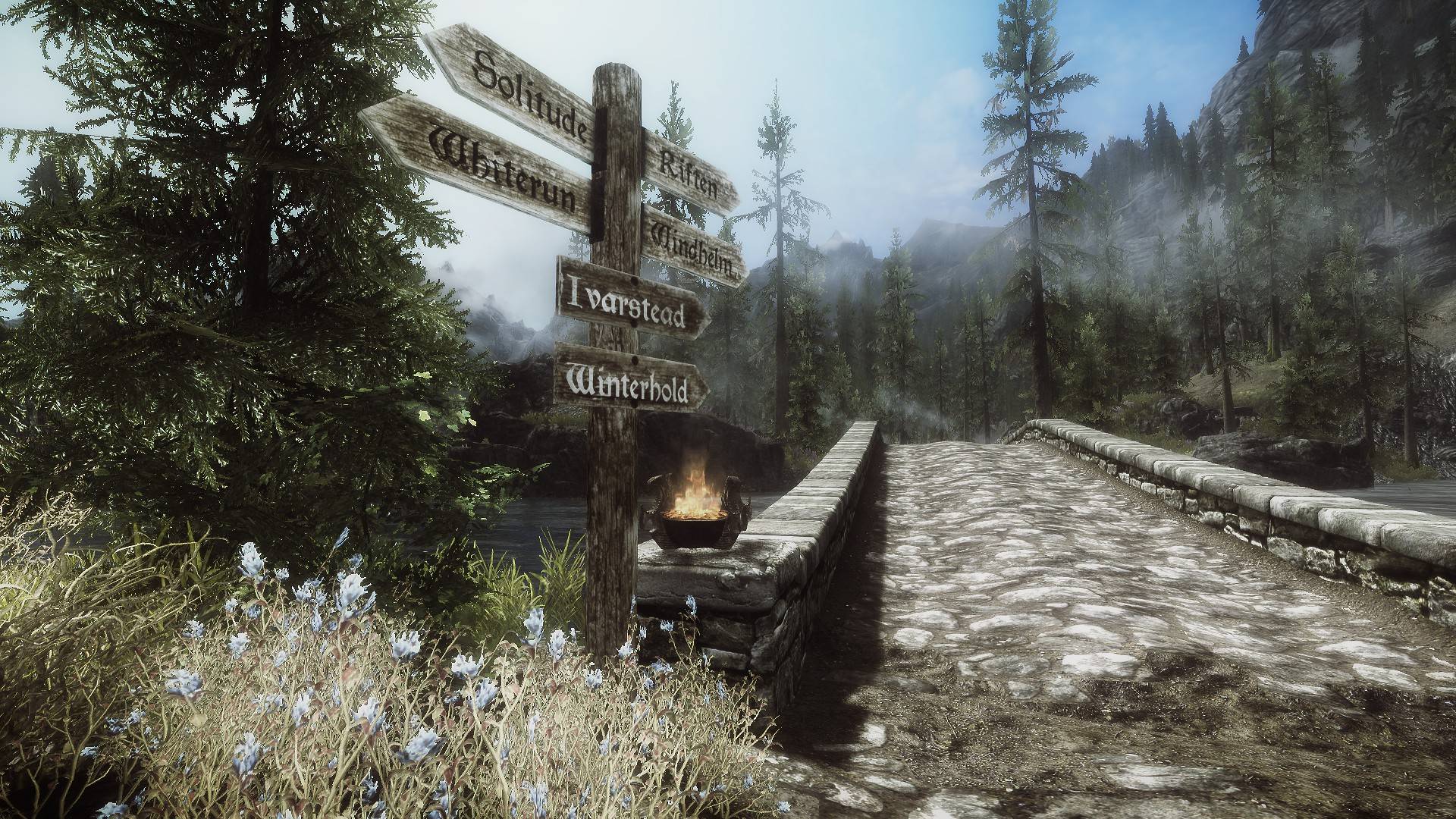 Pro Tip: Listen to the beat of your footsteps and match your running to the rhythm. You’ll feel like a superhero and it will increase your immersion level 10 fold.

Here are the results of my 60-minute workout:

This was incredible. If you notice, my average heart rate stayed relatively low and my max heart rate never made me break into a full sweat. This puts Skyrim in a new strange category. When most people think of exercise they think of either quick bursts of highly focused energy or bringing their average heart rate up to a high level for extended periods of time. Instead, Skyrim allowed me to slightly exert myself for extreme amounts of time.

Normally people would never jog in place for 1-4 hours but with Skyrim I didn’t even think about it. This workout and my previous 4-hour workout test shows that Skyrim can be a low impact easily sustainable exercise in a game that people naturally play for hours. In my 4-hour test, I likely burned somewhere between 1,200 and 1,800 calories which is consistent with the results from this 1-hour workout.

As a side note, I typically do HIIT 3 times a week, which is why this is so bizarre to me. Two days after my 4-hour workout my legs were sore. I never considered jogging in place would make me sore…because I never thought of jogging in place as an actual workout opportunity.

So one essential component of this workout is pumping your arms. Since you’re jogging in place you really need to make the most out of every pump. Focusing on flexing and having good form will go a long way to keep your body moving. Plus it looks really cool in the game.

Very rarely do we ever give a VR game 10/10 on legs but Skyrim is no ordinary VR game. One trick to remember is to lift your legs. It’s easy to shuffle your feet but if you want to get the most out of your workout lift your legs. In fact, when running up or down hill challenge yourself with high knees. Believe it or not, it will feel somewhat natural.

This can be a good core workout. I say “can” because it’s up to you. Jogging will help with your core regardless, however, flexing your abs and standing up straight will give you a legitimate core workout. Especially if you add a weighted vest.

Since I was a kid, or maybe since the launch of the original Skyrim in 2011, I’ve never felt so much like the dog in this gif after taking off my headset for a 1-minute break.

Skyrim has at least 50 hours of gameplay and the replay value is through the roof (not a dog pun.)

Skyrim is in a category of its own. It loads quickly, and you can get into the action fast, so it could easily be part of a larger VR workout. In addition, with 9 cities and 8 towns, there are endless running routes if you’re actually looking to map a GPS run. However, the largest impact this game will have on fitness will be for those who play/jog for hours at a time.

So this may be a sticking point for some. For me, I’ve experienced 0 nausea while playing but since this is a free motion workout (meaning you use the trackpad to move) if you stand still you’ll feel like you’re riding a Segway on a tour through Skyrim. I believe pumping your arms and running in place is a great way to increase the immersion factor while also tricking the brain into believing the experience is real. With that being said, some may experience nausea regardless of any tips and tricks.

Skyrim is not a socially competitive game. Though it’s fun to talk to friends about your character and compare journeys, there’s no points or scoreboard and, as of now, it’s solely a single player game. Though this could be changing…as Skyrim Together may work in VR.

Skyrim is a literal game changer for VR and, I believe, a turning point for VR gaming. Not only is it far and away the best title for VR but it could also shape up to be the best VR workout game for those who wish to do low impact, long duration cardio. The modding community is in full force with Skyrim and has made it easy to update 2011 graphics in our 2018 world.

The only real downside is some people won’t be able to play due to motion sickness. Though it’s a real possibility I wouldn’t let it hold you back from trying and I would do whatever it takes to gain your Vive legs and overcome any discomfort. This is the closest thing we have to Ready Player One or Westworld.