Yes, you can finally feel inside of VR and there’s another suit, called the Teslasuit, which will let you do something similar. We’ll first go over what AxonVR Haptic truly and then I’ll explain why I say that the company has stumbled.

It Works With Haptic Feedback

There’s a layer that tells you the temperature and there’s a layer that tells you the type of texture you are feeling. These are downgraded from what you would actually feel. For instance, when you have fire on you the feeling is that of warmth rather than you screaming as the flesh is peeled off your body. They did this for obvious reasons. Likewise, the texture is somewhat dulled so that you don’t feel the true pain of having a spear through your hand because no one wants to get an arrow to the knee, am I right?

There are three elements to this. You have the HaptX, which is what controls the sensations of everything you feel and this comes in the form of a suit. You then also have the HaptX Skeleton, which lifts you in the air so that you have a full rang of motion. This allows you to feel like you are actually climbing on those virtual steps.

Why this is Good for Fitness

This may seem odd if you’ve only been in the fitness industry for a small bit of time but there’s something called temperature training. Temperature training is when you use the aspects of the temperature in an environment to help with your exercise. For instance, the best time to take a jog is when it is either cold or hot out, but never in between. Cold temperature cools your body down, which makes your body react by burning more fuel in order to keep the temperature up. Hot temperature heats your body up so that even if you moving slow, you are still burning off the calories through the production of sweat. You see this with movie montages and military training, provided you actually did anything with military training. A new recruit that’s too have to go in will wear two layers of garbage bags underneath their clothing. The first bag traps the moisture to your body and the second bag traps the humidity raised by your body’s temperature. This makes you hotter and thus makes you sweat more, which means you burn more calories as a result even if you stay at the same speed consistently. Needless to say, adding a little temperature training to some games helps speed up the fitness role VR can play. 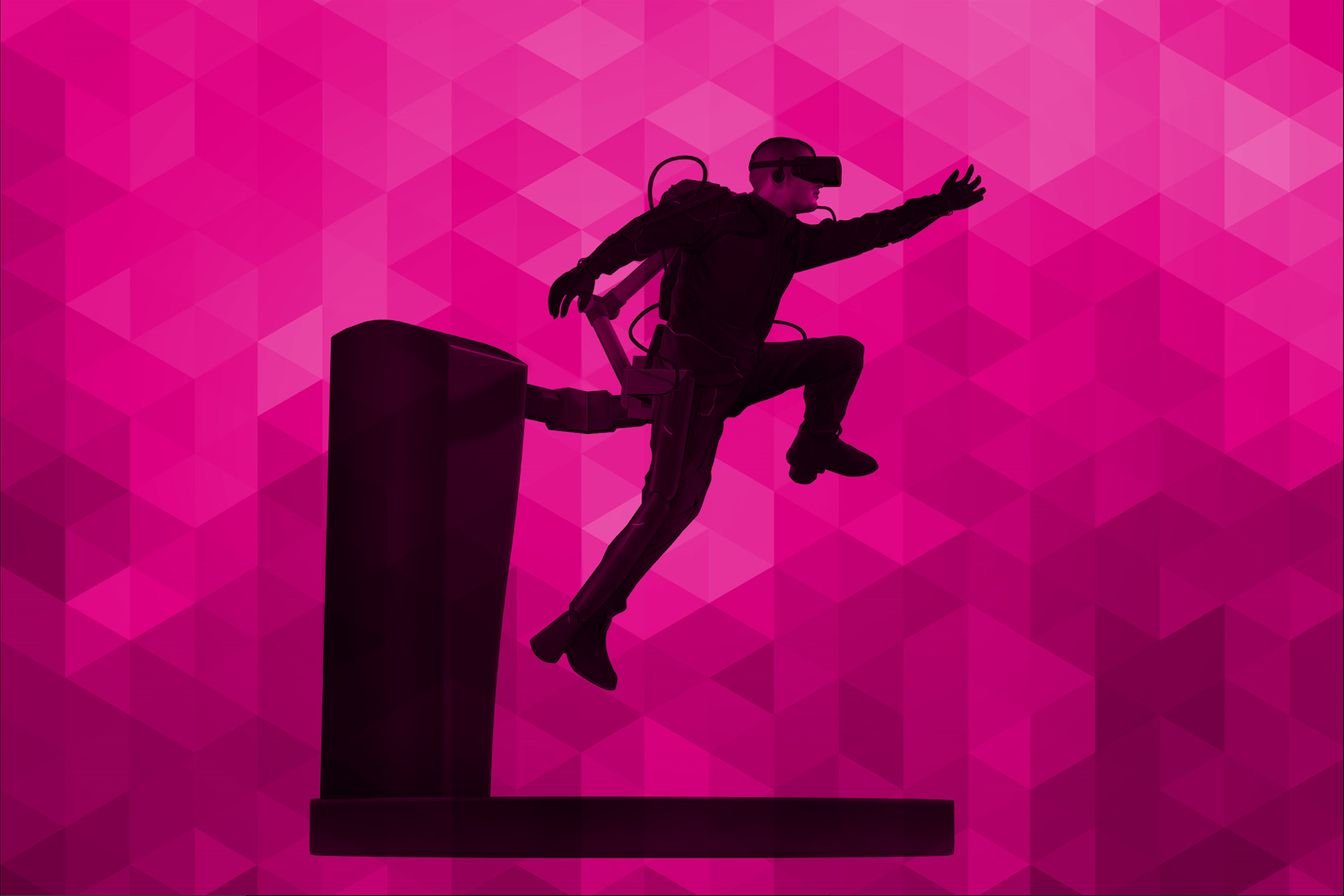 Likewise, you have something else here called Physical Hypnosis Training. This is a rarely used term that refers to the action of the mind convincing itself that it is exercising. In a VR game, breaking the reality of the game can be bad for fitness because the mind is using the fuel inside of you to move your real motions. In a situation like the HaptX Skeleton, you can convince your body that it needs to use fuel for a situation that is in the Virtual Reality environment rather than your own. An example of this is the feeling of walking up steps. In reality, you are just walking on air, which uses a minor amount of leg force in the thigh and mostly focuses on abs. In virtual reality confusion, your mind could be tricked into focusing the energy in your calf and not just your thigh because it believes you need the strength to push upward. Likewise, it would use some shoulder muscles if you are using a rail while you do this that involve the back muscles while being in the air would just mean you use the bottom of your arm and your shoulder to sustain your arm in the air. As you can see, confusing the mind into believing it needs to power different muscles can have a very different reaction in fitness.

Where do they Stumble?

In the same area nearly all other VR exercise equipment stumbles: weight support. Specifically, body size because if you look at how the HaptX is designed, you will notice that it is a full-body suit hoisted by a machine and the model that they use is pretty thin. I’m not talking about whether I can fit my gut in it or not, but rather the accommodation for size. Theoretically, you would have to predict the size of each person in order for that person to receive the proper feedback. For instance, if you have fire on your arm but the prediction was supposed to be in your hand. Therefore, making an appropriate suit for each person would be the challenge for this company and seeing as they are a new company, they will likely go with the average size once again. This would deprive many people of this experience and this is the problem of making a suit, instead of going with a modular design that allowed individuals to attach the HaptX themselves to their body but then the company wouldn’t be able to hide all the wires. This is all an assumption and could be very wrong as to how they delivered the signals to the body. However, if they went with the diodes method of distribution then this would be the likely result. There are some other ways that could transmit the signal, such as wirelessly, but then they couldn’t perform a full body immersion like you can with a suit. As I said, this is all speculation so we’ll have to wait for their product release to make any final calls.