In a very short time, VR has grown far beyond just being a headset and some cool graphics. There are all sorts of devices designed to make the virtual worlds more vivid and real. These devices are built to mimic physical sensations and they include robotic hands, gloves, body suits and exoskeletons. But, these devices still lack the ability to create a realistic impression of spaces or structures, for instance, walls and doors. Lacking these features can impact the user experience, in a negative way.

Just imagine you are having fun in your virtual world, everything seems real and you realize that you can walk through a wall. It kills the fun. Well not for long. Researcher Pedro Lopez managed to create a sophisticated wearable devices that uses electrical muscle stimulation that delivers sensation to the user’s muscles. It’s based on small electrical shocks like the stimulation used in physical therapy. “We were really interested in trying to explore one of the hardest things to recreate in terms of physical sensation, which is a wall,” said Lopez.

At the Hasso Plattner Institute in Potsdam, Germany, Lopes and his team found out that they can use the user’s own muscles against him. The wearable artificially creates counterforce, or the feeling of resistance by triggering the opposing muscles. This fantastic equipment will allow users to have full VR experience by providing physical sensations for every object they can find in the VR world like ball, cube, buttons or doors. The wearable is simple. It has eight small electrodes that are hooked to the user’s skin.

The electrodes are stuck to the forearm, bicep, triceps and shoulder of each arm. After that, the wearable is hooked they control the sensation with eight channel muscle stimulator, which is controlled by the VR simulator. The best thing about his equipment is that is small and very practical. It doesn’t include complicated gadgets and can be worn in a small bag. The future is already here. Now, we will have full user experience without interruptions or false VR worlds.

The major potential here is that this is something you can have with very little hardware,” he says. “The hardware is a few flat electrodes on your arms. No exoskeletons, big setups. You just put the electrodes on, and suddenly you have walls, buttons you can press, a cube you can hold on, and you feel the weight.”

Muscle stimulation is not something new. It’s been used in physical therapy for years. The challenge was to create that real experience and sensations in the VR world. In the beginning, Lopes was unhappy with the result. Yet, with constant analysis and tests, he realized that shorter stimulation impulses create better results.

Before the final public announcement, he tested the equipment with real users. He asked the study participants to try pushing against different walls in a virtual room and then measured their reactions with different metric analysis. 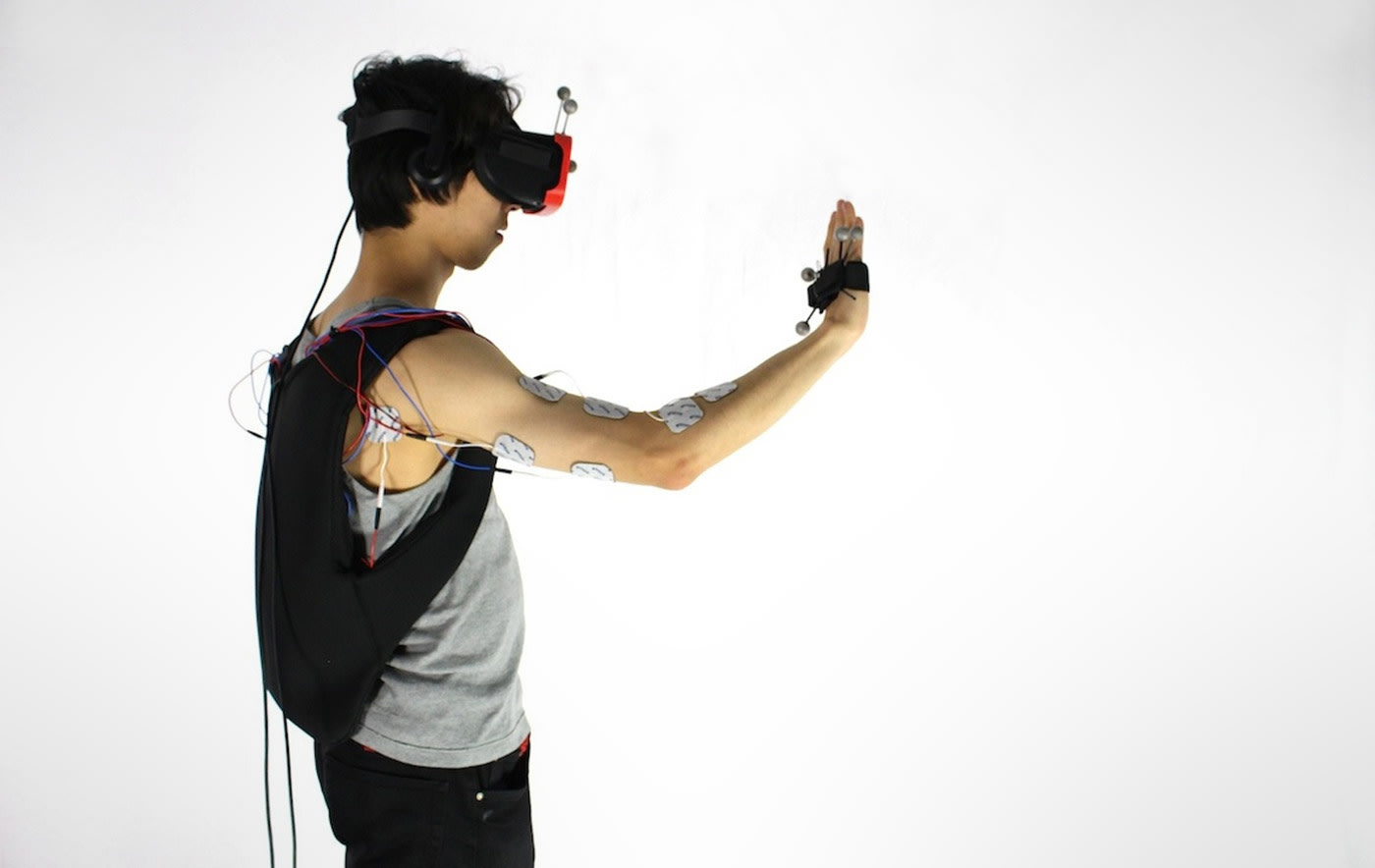 “We realized that if we let you just feel a short pulse for 300 milliseconds, you won’t even know where it’s coming from, but your muscles will react,” he says. “Because it’s so brief, there’s no way you can rationalize it.”

Many companies like TreeSense and Tesla suit are developing electrical stimulation based mechanical equipment. This trend is good for moving things forward but Lopes says that mechanical equipment can actually inhibit feeling, rather than completely enable it.

“Some Kickstarters that are trying to bring some of those ideas back, like gloves that have motors that pull your fingers. They’re cool, but the moment you put on a glove, you can’t grab objects or even feel a normal wall,” Lopes says. He thinks that the next generation of muscle stimulation equipment will be thin and wireless sleeves with electrodes embedded in them.

It’s obvious that using electrical impulses to help guide an experience isn’t the only use of this new tech. Because Lopes himself makes it very clear that his approach creates counterforce, or the feeling of resistance by triggering the opposing muscles. Most importantly, his assertion that “your muscles will react” means that these simple electrical impulses can and do impact on your muscles. Is this going to get you bigger biceps in the next few months? Probably not. But can it be a forerunner in what it means to get fit in virtual reality? Absolutely! We’ll continue to follow this tech and any others like it and report on how it evolves, hopefully landing in your next workout sooner than you’d think!

Boxing VR Fitness Games – Which is Right For You