To say that eSports is on the rise would be an understatement. eSports are video game competitions in which hardcore gamers compete against another in online matches for cash prizes, sponsorships and glory. There are even some eSports scholarships available to the best of the best who are interested in obtaining a college education while pursuing their eSports passion. Intel recently unveiled a brand new virtual reality eSports league dubbed the VR Challenger League. This is major news as it incorporates virtual reality into eSports and involves some of the biggest names in the business.

However, the chip maker is putting its own twist on eSports by opening the door for competitive online and in-person virtual reality gaming competitions. This piece details Intel’s new virtual reality league, known as the VR Challenger League. It delves into the company’s partnerships with game makers and reveals the games that will be featured in the VR Challenger League. Intel is also embracing VR with Linkin Park Destination, a seemingly futuristic virtual reality experience that lets fans interact with the band up close and personal virtual manner.

Intel is teaming up with Oculus and Electronics Sports League (ESL), the world’s largest eSports organization, to bring its VR Challenger League to the masses. This virtual reality eSports league was recently announced at an E3 2017. The VR competition will kick off this July.

“From giving the world its first look at our upcoming Intel Core i9 Extreme Edition processor to accelerating eSports and the future of VR eSports, we’re excited to be part of one of the strongest PC gaming showcases at E3 in recent years.”

This new VR gaming series provides players with the opportunity to compete in Insomniac Games’ The Unspoken and Ready At Dawn Studios’ Echo Arena. Intel also contributed to the development of Echo Arena. The game was recently unveiled as a VR multiplayer game available to all Oculus Rift owners by way of a free download. The window for download commences July 20 and extends for three months. Teams consisting of up to five players square off against one another in robot form in the game’s Lone Echo mode. The twist is that the game’s environment is void of gravity. It is fairly similar to the space sport played in the popular book and movie Ender’s Game. Players use their hands to boost, glide and punch toward scoring goals at breakneck speed in the virtual realm.

Intel’s virtual reality eSports competition will occur online and also at large-scale in-person events that feature players from countries across the globe. The league’s finals will be played in 2018 at Intel’s Masters World Championship in Katowice, Poland. Intel launches The Unspoken brackets on July 12 followed by Echo Arena’s brackets on July 20.

Aside from announcing its VR Challenger League and the team-oriented Echo Arena title, Intel has also announced a virtual reality partnership with the popular rap-rock band Linkin Park. This intriguing virtual reality experience will be called “Linkin Park Destination”. The endeavor will be powered by Intel and Spatialand. Intel representatives have stated Linkin Park Destination will provide fans with the opportunity to interact with fans through a curated VR experience. This means fans will be able to engage with Linkin Park band members while on tour, in the studio and beyond. 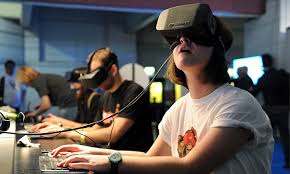 Linkin Park’s VR destination is accessible through the Spatialand app. Aside from interacting with the band, fans will also use the technology to purchase band merchandise, sign up for contests and unlock secret fan events masterminded by Linkin Park band members. An Intel spokesperson stated Linkin Park Destination will be available at some point in July of 2017.