If you’ve got what it takes to mow down mobs of enemies while under heavy amounts of fire, the Space Pirate Trainer is for you. Now, remember, this game is a training simulation for a position that doesn’t exist so just think of it as a future investment. We’ll figure out how to bend space and time… soon…ish.

What is Space Pirate Trainer?

It’s an arcade shooter game with neon lights. You have the option to carry two pistols or a pistol and a shield. The enemies will grow in each round and I’ve not seen anyone reach the “end” of this game yet due to how difficult it is. The “awe inspiring” wave is in between 30-40, so you’re in for a long haul. For now, the enemies are just drones that multiply and become harder to kill.

As I mentioned previously, this game is about neon bullets and the drones you have to shoot. Otherwise, this game is not out there to impress anyone with the graphics inside of the game. 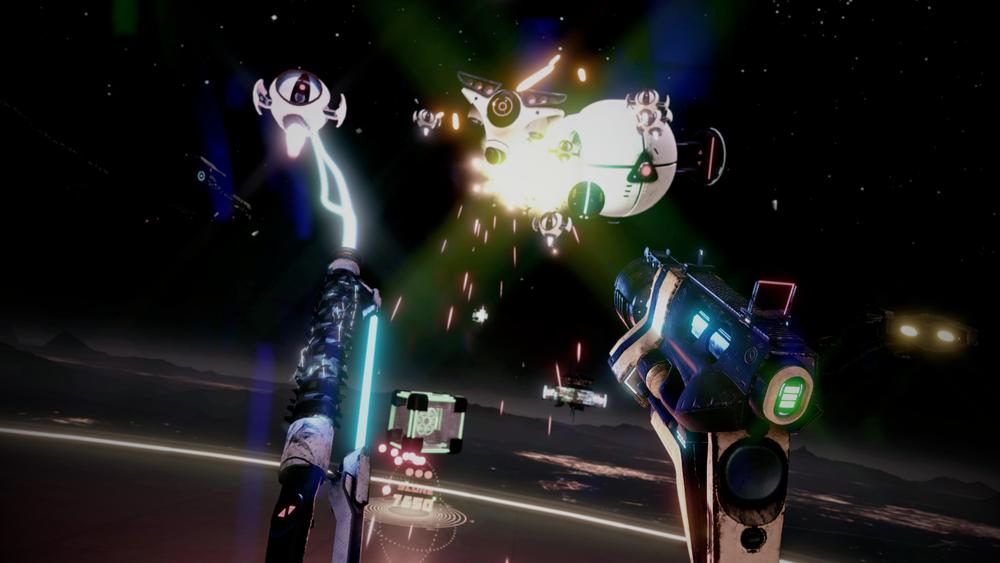 This game requires a good bit of RAM at 8GB, but the remainder of the hardware is standard for VR. You need a Windows 7 System or higher with an Intel i5 4590 on a GTX 970 with 1GB of space. It’s rather small, but you need the RAM due to the massive artifact generation.

This is where the game can either be the best fitness game you have or an abysmal failure until you “get good”. If you are good at shooting in the virtual space then you will find that this game easily pushes you to your limit since the only way to stay alive for any period of time is to continuously move. If you are not good, then you will find that this game is much more difficult for you to get to a point where you start sweating. This is because you will get to a point where dying repeatedly stunts you from getting any actual workout. At the same time, removing the ability to die would hamper what makes the game hard.

It’s very easy to pick up and understand. The background is made to not distract you from the battle at hand and the flow of battle is very smooth with very little in between time from waves. This is important for those who find it difficult to keep with the flow of a fight due to the amount of time spent waiting for the game to load in the next set of enemies. The score has gotten as high as 600,000 and the game still didn’t force an end. This is one of the best games on the market.

While the game is great, the need for so much RAM may prove difficult for some who’ve just entered the VR gaming industry. Beyond that, for a game that is only $14.99 and is still listed as an early access game this game is truly incredible. Be sure to check out the forums as many players are actively involved in setting new high scores and share strategies on how to go even higher, so if you’re looking to break through your current score then I definitely suggest checking out the forums for this game.