Home Hardware Create Your Next Nikes in Augmented Reality! Nike has taken the first step that many other companies took during the year of 2016; incorporated technology into old stagnant products. First, let’s go over how “unchanged” the shoe has been since its creation before talking about Nike’s implications on their new design.

Shoes are 40,000 years old. I know, it’s crazy that they’ve been around so long and that we need to see the history to see all that this new decision can impact, but curiosity is likely on the mind right now. It wasn’t until the 18th century that we started making them really fancy with the pumps you see around today and the heels that still make women’s feet cry in pain, but look so good. It was around this time that our footwear began changing.

Now, what also happened in the 18th century? A lot… and I mean a lot. Pianos, tuning fork, steam engines, fire extinguisher, flying shuttle, lightening rod, the sextant, carbonated water, submarine, gas lighting, smallpox vaccination, and even bicycles were invented, I repeat INVENTED, during this time. These are products that affect our everyday lives and they were invented nearly three hundred years ago, around the same time that shoe fashion finally split into two genders. For the past century, shoes haven’t received many updates until very recently. Sure, they actually got the left and right shoe to make it more comfortable to wear, but men’s shoes in particular primarily remained the same.

In the past decade, shoes have gotten radical upgrades like that of the frictionless shoes provided by VR environment machines. You’ve got cages and flames and a lot of different designs on them for women, but men still received a similar design into what they got in the past. Therefore, if we follow the trend that we’ve seen then Nike’s decision is much more than just a new shoe because as you will notice, inventing industries tend to coincide with new adoptions of different types of shoes. 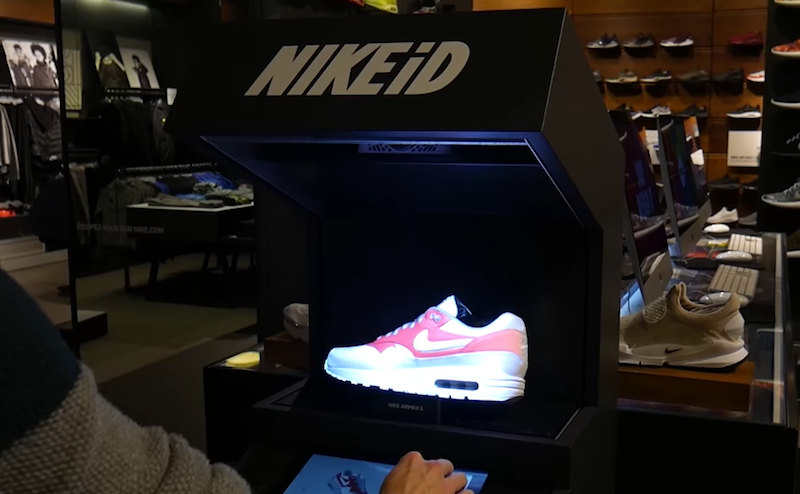 Is not all that hyped up for what it looks like because they didn’t reinvent a new shoe. I know, disappointing, right? Well, not entirely because what they did do is provide a physical way to put your designs on a shoe that you can actually look at that’s not digital. They may design a shoe that lets you change its design with an application in your future, but not so much right now. However, this is still an important step forward because it opens up an entirely different market.

We’ve seen what 3D printing can do and a lot of people have got a 3D printer because they want to make their own custom products to suit their needs. Nike’s “invention” leads us down a similar direction to fully customize what we get instead of us going to a store and buying a design that marketers hope will sell well. By making their shoes this way, people can just find a comfortable shoe that they like and then come up with their own design that they prefer. This a complete industry turn around because it used to be that companies made a product that people might like and this provides companies to make a product the customer designed for themselves.

What Use Is This In Fitness?

As of right now, this is just an aesthetic that people are allowed to play with but Nike could take this one step further. How about shoes customized to fit your foot? This is a level that only the elites have had access to up until this point. I remember walking into Dillards with my 15 ½ inch feet and looking at the shoes that could actually fit me. They were nice and comfortable, something I hadn’t experienced since I was a preteen. Then I turn over the shoe to see the price tag of a grand or more for a shoe that actually fit me. Needless to say that Amazon got my business for $950 less and I still got some nice shoes. If Nike were to allow customized building of shoes, not only would they never really need to advertise anymore but they would become an instant monopoly. Your shoe would support your arch, no matter how flat it was. The shoes would be optimized for your running and your health.

However, Nike has yet to take this the step forward that it will surely end up being but the fact that shoes are starting to see a reinvention period makes me hopeful that we will see another period of good long-standing inventions that finally launch us into the new century we’ve been waiting for. Until then, just bug them enough and they might change their minds on how they make shoes.