Goldeneye 007 is heralded as the first truly epic mainstream first-person shooting video game for consoles beyond the personal computer. The game’s appeal is multifaceted. It was widely celebrated as one of the first successful movie-to-video game ports. Gamers also raved over Goldeneye 007’s control scheme, amazing graphics and precise physics. Though Goldeneye 007 was not the first first-person shooter video game to hit the market, it certainly was the first to achieve considerable mainstream success, making the Nintendo 64 console a must-have for video game fans across the world. This game had a magical feel to it as it provided gamers with a seemingly real environment in which they could play the role of hero as James Bond from a first-person perspective. Most games were played from the third-person perspective in 1997, making Goldeneye 007 that much more idiosyncratic. 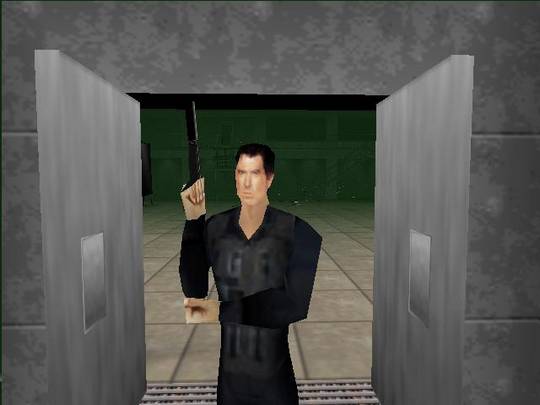 Goldeneye 007 allowed gamers to play the role of James Bond from the first-person perspective. Bond makes use of all sorts of cool weapons throughout the game as he attempts to stop a criminal syndicate from decimating London with a satellite weapon. Yet the game did not require button mashing and a “shoot everything in sight” mentality like most other shooters. Rather, it rewarded players who relied on stealth in order to thwart the terrorists and save the world. Players roam an array of unique stages while working for the British Secret Intelligence Service. An array of stealthy weapons are used along the way, ranging from the silenced PP7 to the sniper rifle, golden gun, cougar magnum, moonraker laser and even a watch laser.

Yet the single player “on the rails” mode of Goldeneye 007 represents only one-half of the game’s appeal. Ask anyone who owned this game in the late 1990s and they will testify to the fact that the multiplayer mode was even more fun than the single player mode. Four players could compete against one another in a multiplayer deathmatch. Deathmatch games were free-for-alls in which players shot one another until the last man was standing. It was even possible to team up with another player for cooperative multiplayer deathmatches.

Goldeneye 007 could be ported to virtual reality hardware without an extraordinary amount of effort or financial investment. Players would wear a VR headset while holding either a VR gun or a controller. If the game designers opted for a specialized VR gun, it would be equipped with motion tracking technology to gauge the player’s aim. Alternatively, the player could aim and shoot with a traditional controller. The hardware would also include motion tracking to accurately measure the player’s movements as he dodges enemy fire, crouches behind objects, runs and sidesteps.

This game would be massively popular if brought to life in a virtual reality environment. Players would do everything from crouch to run, stealthily move with “baby steps”, crawl, jump and so on. Though Goldeneye 007 forces players to move and kill in a discrete manner, the game has its fair share of chaotic moments in which players must move at a fast rate of speed to escape enemy fire or obtain the proper positioning  to execute a kill without enduring extensive damage.

What is Goldeneye 007 VR was truly VR Fitness?

The multiplayer mode’s fast-paced, heart-pumping action would serve as a fantastic workout. Players would spend a considerable portion of the deathmatch on the run, attempting to escape enemy fire and shooting away at opponents. Highly skilled players would battle one another in competitive deathmatches that could last upwards of half an hour or longer. Such a workout would likely burn a couple hundred calories at a bare minimum. There is no doubt that Goldeneye 007 in VR would be an incredibly fun way to stay in shape.