Home Science Beat Pain with VR (and Get Fitter!) Most people think of virtual reality (VR) as a high-tech headset for playing exciting games. However, VR has the potential to drastically improve quality of life. This technology will soon help people overcome their fears, get into shape and even reduce or eliminate pain.

Physicians are currently testing out VR as a means of decreasing pain. Unlike many other pain treatment methods, VR is not addictive in any capacity and can be transported with ease. Add in the fact that VR is quite cheap compared to the long-range cost of medicine/therapy and it is easy to see why so many medical professionals and patients are turning to this potentially revolutionary technology.

As an example, consider a burn victim who is undergoing extensive painful medical operations to clean and re-bandage the burn site. VR would play a role in the pain treatment in the form of an engaging distraction. The technology draws the patient’s attention away from his pain as well as the pain involved with operations. Such a distraction reduces the intensity of the pain by immersing the patient in a captivating virtual world. 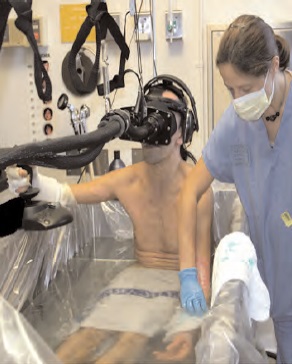 Studies show that patients who are exposed to VR enjoy an average of 60 percent pain reduction. Some patients who engage in VR during operations/treatments have even reported full pain relief during their virtual sessions. This breakthrough pain reduction technology has the potential to drastically reduce the need for costly analgesia drugs.  More importantly, VR is making life that much more tolerable for those saddled by excruciating pain.

It is no secret that exercise is painful. Most of us would prefer a pleasurable distraction from the intensity of exercise. Enter virtual reality. This technology will transform the exercise experience in the same manner that it is poised revolutionize the patient’s experience during pain treatment.

Imagine a hypothetical situation in which someone in the deep south is faced with the prospect of going for a run or bike ride in triple digit weather with considerable humidity. He can strap on those running shoes and punish himself while pounding pavement or he can exercise with the assistance of his VR headset in a climate controlled room. Why would anyone opt to run or ride a bike in the stifling heat and humidity when they could stay in a comfortable indoor environment and engage in a VR workout?

It won’t be long until VR fitness centers open across the United States. Many will elect to engage in VR exercises from the comfort of their home. All one will need is a few feet of free space, a VR headset and fitness software.

A virtual workout has the potential to prove just as intense an beneficial as a traditional workout. Yet there is a critically important difference between traditional workouts and those performed with VR headsets. Virtual reality environments are fun. They serve as a highly enjoyable and immersive escape from the “real world” that so many of us have grown tired of.

Hundreds of programmers are working on VR fitness software at this very moment. These software designers are building interactive virtual environments that are exciting, visually stunning and truly engaging. Immerse yourself in such an environment for a workout and it won’t prove nearly as boring as running on a treadmill, doing step aerobics or jumping rope. Intense exercise isn’t nearly as painful or tiresome when you are having fun. This is precisely why VR workouts are set to reach a mainstream tipping point and explode in popularity in the months and years ahead.