Sometimes people get a little too preoccupied with what’s new and exciting that they forget about the tried, tested and true methods. Fitness in VR can be an evolution, and at least for today’s means, it has to be. You can’t expect the idea of getting fit to suddenly not follow the same principals of lifting, pushing, pressing, running, lunging and moving around. While a truly VR fitness experience may not be available today since most of what’s out there is cardio based and without any resistance, there are ways to take your VR workout sessions and kick them up a notch, even if the tech isn’t there yet. Enter a solution that athletes have been using for decades: A weighted vest. 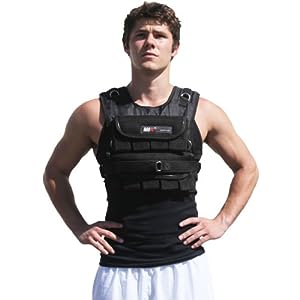 There’s a massive body of research to support the use of a weighted vest in virtually any training approach. Research published in the Journal of Applied Physiology that looked at the impact of adding load baring weight to your workout concluded obvious results. In fact, study participants had an increase of 30% in leg strength with a nice boost of more than 10% of short term endurance for cardio.

Another study found that athletes who trained with weighted vests saw a marked improvement in their speed! Study participants were given vests that weighed 10% of their overall weight and after a month of training with this add on, they saw a 25% increase in endurance for sprints and stair running speed ticked up by 3%.

Want more proof? Even the simple act of walking has been shown to have greater benefits with the use of a weighted vest. The study, which was published in Medical Science Sports Exercise discovered the impact of using a vest during treadmill walking. The results showed that the vest did exactly what we want out of our workouts: It ups the intensity no matter how hard you’re working.

Remember Job Stauffer, the guy who lost 60 pounds through the use of VR? He’s a firm believer in the benefits of adding a weighted vest to your VR workouts:

“I’ve always used 1lb per hand weighted P90x Gloves for working out in Soundboxing, but this Spring I began to wear an adjustable weighted vest as well. I picked up one from ‘RunFAST’ on Amazon for less than $80 and it weighs up to 40lbs. Currently I have it set to 30lbs, and have worked up from 20lbs a month ago. It feels great with Soundboxing and I can already feel the effects on my legs and core. It also REALLY adds to the intensity of a game like John Wick Chronicles in VR, which has you popping up and down behind cover and planking on the ground to recharge and avoid enemy fire while reloading and lobbing grenades from the low angles. The blood pumps, the heart rate surges, and you get a serious workout playing video games in Virtual Reality. How cool is that!?”

How can you include a weighted vest in your next workout? The answer is really simple since you don’t have to do much more than slide one on like you would a jacket. Once you’ve made the decision to use a vest, you should do your research and find one that affords you the luxury of options for how much weight you’ll be carrying when you wear it. You can find some options at your local sports equipment store, Amazon or even Walmart. But it’s less about the one you chose and more about using it smart.

The key is to start slow. Don’t just load up the weight to the point where you can’t move about freely. According to Kendall Wood, CSCS, and author of Core Fitness Solution, “Start small with the weight–even 10 pounds can make an impact on your workout.” Wood went on to say that users should also gradually increase the weight: “Continue adding 10 pounds to your vest every 2 to 4 weeks and if you ever feel like the load is too heavy or you’re feeling faint, lessen the load and gradually work your way up.”

What can you expect from the added weight beyond better performance and overall better health? Wood made it very clear to us: “If you consistently workout with a weighted vest and gradually increase the weight, you’ll see increased fat loss and muscle gains–it’s as simple as that!