If you’ve been using VR as a means to workout like so many have discovered in the last year, then you’ve heard of GoalkeepVR. This game may look simple and it may seem like you could master it in minutes, but the allure of the gameplay is still there. Why? Because this game captures what it means to play sports in VR expertly within today’s technological offerings. You’re not in a room playing against another team. You’re not on a field playing a position. Nope. In fact, you’re just the goalie, but after a few shots are fired at you, you realize just how important the goalie is to soccer and this particular game immediately. The best part? When you play this game, you get all the benefits of VR gaming today in one simple experience: Fully immersed, intensifying gameplay that makes you move without thinking about it. We had a chance to sit down with the creator of the game, Rob Frank, to discuss GoalkeepVR, the workout it offers and what he expects from the VR segment as tech evolves.

VRFI: Soccer is the biggest game in the world so the idea of a soccer-based VR game has to have been on a lot of minds. We loved yours, but why did you decide to a sports themed game?

Rob Frank: GoalkeepVr was my first commercial game and one of my first Unity experiences. I was playing around with the physics and started spawning balls that went towards me and found that it was fun to try to block them, and so I decided to turn it into a full fledged game.

VRFI: Afer creating a sports based game in VR, you must have some thoughts on how vsports will evolve in VR. How do you see that still untapped segment evolving?

RF: I think they will be more intertwined than most people imagine right now. I believe once the technology gets a little better and we can break free of cables with good framerates, we will see a large increase of fitness VR experiences related to biking, yoga, running, and sports.

VRFI: Does fitness come into play when you’re designing a game? If so, at what point and in what way?

RF: Depends on the game. I know some people are not physically able to do certain exercises and wouldn’t want to design a mechanic around an idea that not everyone can do unless the game was built for that.

RF: Full team as in an entire sports team in VR? I think right now the play area space is a little limited for that. Real sports rules would have to be modified fairly heavily for that to work. However, I could see if we get to the point where wireless VR is very good, perhaps specialized arenas in warehouses with skins in VR so the players would see something different and we could watch it over mixed reality.

VRFI: Was it more of a challenge to do sports in VR than a typical storyline or FPS game?

RF: I think it was easier in my case because there is not a lot of human animation or interaction, it’s really down to the basics of what you need for soccer which is balls and a net!

RF: No I was not! I quickly realized it would be after getting a prototype build done and started sweating during my testing. It was physically tiring to verify that each mode was working correctly! VRFI: Clearly, its the type of game that anyone could step into and immediately know their challenge, but playing a goalie aside, this game can really be a workout. How do you feel about people using this game for fitness?

RF: I love it and encourage it! I have had a few reviews telling me the “Bullet” mode reminds them of being a hockey goalie, and other people using it for fitness as well. I know someone on reddit did a 90 day VR fitness challenge, not sure if he used GoalkeepVr during it though. I think it really gets you to squat down and move quite a bit laterally if you let it.

VRFI: Please talk about the increasing intensity of the gameplay and why it’s important to the experience.

RF: I think the gameplay is the most intense and engaging when the play is intense. You don’t have time to stop and think about why your hands are marshmallows if you have enough balls coming at you.

VRFI: What platform do you prefer to use for VR? Is there a platform (Vive, Oculus, Gear) that you think your game performs best on?

RF: I prefer the Vive because I really enjoy the room scale aspects of VR and feel it was designed from the ground up for it.

VRFI: How do you see fitness and vr evolving together?

RF: I think they will continue to evolve together. The most immersive VR experiences have you physically moving around your play area which is great. I am a big advocate of using games for learning and believe they can trick the brain into having fun. Fitness is along these lines, when hooking up a VR system to a stationary bike, it can increase your enjoyment if you get to see varying scenery rather than your apartment walls.

VRFI: Do you workout in vr? Would you recommend anyone to do so?

RF: I haven’t done a strict routine but I should. I am personally not too worried about sweat ruining my headset but I know some people have had issues. I think just the fact that you are standing and walking slightly is very beneficial as opposed to sitting in a chair.

VRFI: What games are you working on now?

RF: I am working on a virtual reality bartending game called Flairtender, which releases on May 19th! 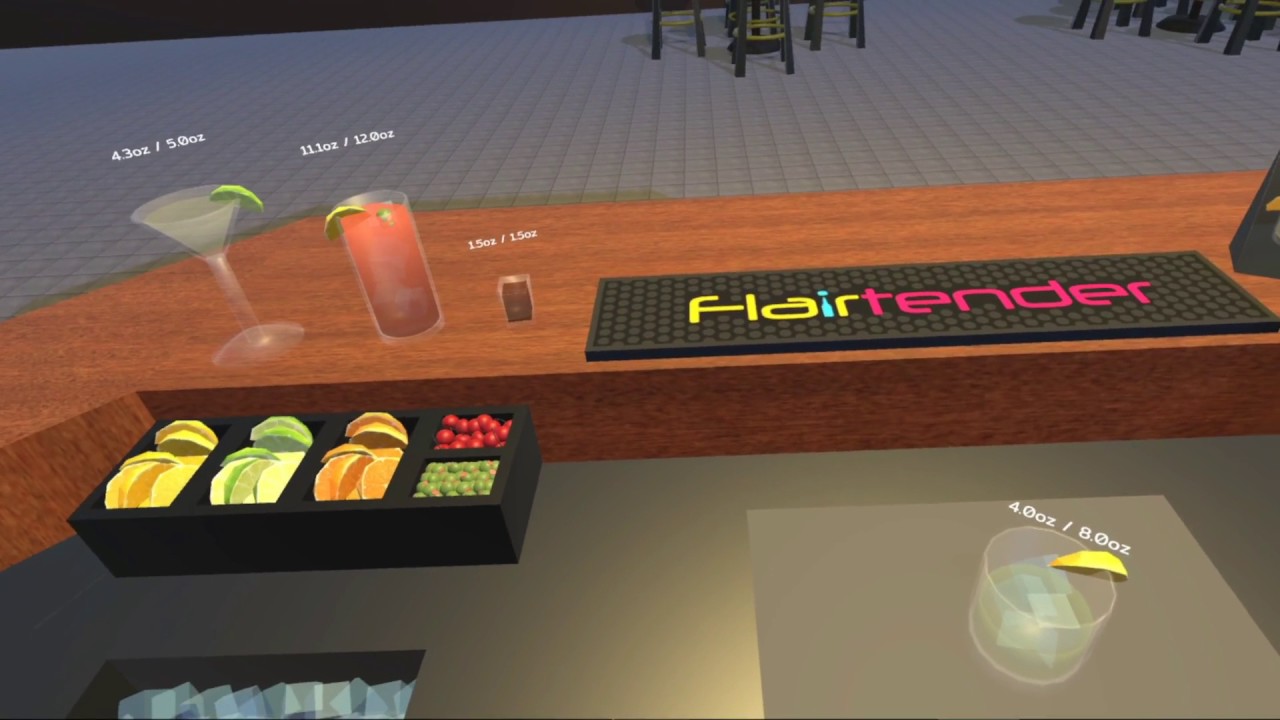 VRFI: What’s your favorite game in VR right now and why?

RF: I have been so bad about playing new games, I spend a lot of time developing and not enough time playing! However, I still love The Lab’s Longbow which is a workout in and of itself! I’m really looking forward to Budget Cuts as well.