Some people prefer the old ways for a lot of things in life. We get that. But recent research from Tel Aviv University shows that combining traditional physical therapy techniques with modern technological advances is the best way to improve motor skills for those with impairments. This means that technology isn’t just the tool to help, but it can make the difference between success and failure when it comes to a complete recovery. 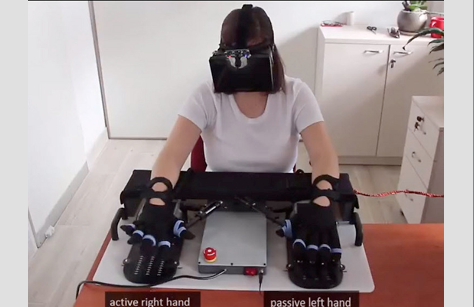 The study looked at people with one impaired hand and a non-impaired hand that served as the example for movement. According to lead investigator Professor Roy Mukamel of TAU’s School of Psychological Sciences and Sago School of Neuroscience, “Patients suffering from hemiparesis – the weakness or paralysis of one of two paired limbs – undergo physical therapy, but this therapy is challenging, exhausting, and usually has a fairly limited effect. Our results suggest that training with a healthy hand through a virtual reality intervention provides a promising way to repair mobility and motor skills in an impaired limb.”

The study included 53 healthy participates that underwent baseline testing to assess their motor skills. They were given virtual reality headsets and shown simulated mirror images of their hands. When the right hand moved, it was the VR left hand that moved and vice versa. Participants were asked to perform a series of finger movements with their right hand while seeing their left hand move in response.

The results showed that participants moving the fingers on their right hands while watching their left hands were able to use their left hands more efficiently after the conclusion of the controlled activity. Most notably, though, was the fact that there was improvement when the motorized glove was moving the hand, but the VR screen showed the left hand moving.

According to Professor Mukamel,

“We effectively tricked the brain. Technologically, these experiments were a big challenge. We manipulated what people saw and combined it with the passive, mechanical movement of the hand to show that our left hand can learn even when it is not moving under voluntary control.”

Researchers are now hopeful the findings can be applied when a patient is in physical therapy because of loss of strength or control of the hand. Professor Mukamel wants to be able to show high-performance gains compared to other therapies by training one hand to voluntarily move and show significant improvement in motor skills. Research is also underway to determine the applicability of the VR training scheme for stroke patients.