If you’ve ever felt nausea or illness when playing virtual reality games, you are not alone. Feelings of vertigo and stomach upset are common for many gamers, and unfortunately, the sensation interferes with gaming enjoyment. Luckily, scientists are working to eliminate VR sickness and might have found the key to playing without feeling sick – a virtual nose.

There are various reasons VR sickness is triggered in some people. A blend of physiological systems are at play when one is playing VR games – a player’s sense of touch and body position, as well as the vestibular ear tubes, the somatosensory system, and the oculumeter system, which is the muscles that control eye movement, are all activated during a VR experience.

According to assistant professor at Purdue University’s Department of Computer Graphics Technology, David Whittinghill, “Simulator sickness is very common. The problem is your perceptual system does not like it when the motion of your body and your visual system are out of synch. So if you see motion in your field of view you expect to be moving, and if you have motion in your eyes without motion in your vestibular system you get sick.”

In the past, there has been anecdotal evidence that simulator sickness decreases in intensity when games feature fixed visual reference objects. For instance, a game with an airplane cockpit and controls or a race car driving experience with a dashboard in the user’s field of view tends to reduce feelings of sickness. Unfortunately, these features don’t make sense in every virtual reality simulation, Whittinghill points out.

Whittinghill’s team of researchers was in the midst of studying VR challenges such as this when student Bradley Ziegler suggested it might be a good idea to try an image of a human nose in the center of the video display. It sounded unusual, but Whittinghill called Ziegler’s suggestion a stroke of genius because of the way in which it mimics everyday experiences. According to Whittinghill, “You are constantly seeing your own nose. You tune it out, but it’s still there, perhaps giving you a frame of reference to help ground you.” 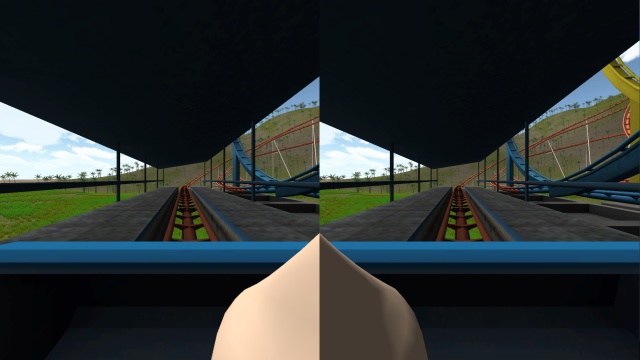 It turns out this virtual nose, called the “nasum virtualis,” was effective for reducing simulator sickness in popular VR games. The findings from Ziegler and Whittinghill’s experiment were presented at the Game Developers Conference in San Francisco. Undergraduates James Moore and Tristan Case also played a role in the research.

In the experiment, 41 subjects operated a variety of VR applications of varying motion intensity while wearing a VR headset. In one, users navigated the interior of a Tuscan villa, while another took on a roller coaster ride experience. Some of the VR experiences included virtual noses, while others did not. Nobody was told in advance the image of the nose was there, and researchers were surprised to realize nobody had noticed the nose while playing.

The findings showed the virtual nose made it possible for those engaged in the Tuscan villa simulation to play an average of 94.2 seconds longer without feeling ill, while those playing the roller coaster simulation, the more intense of the two experiences, played an average of 2.2 seconds longer. Those playing without the virtual noses reported feeling sick playing both games, though the onset of sickness took much longer in the Tuscan villa simulation.

Additionally, researchers used electro dermal activity (EDA) sensors to record electrical conduction across users’ skin. The device measures sweat from excitement, which is also an indicator of simulator sickness. The EDA sensors also detected a difference between players engaged in the experiences with and without the VR noses.

It’s not clear to researchers exactly why the virtual noses work to reduce simulator sickness, but it is clear they do. They suspect it’s because the nose provides a stable object you are already accustomed to seeing without interfering with your experience.

Whittinghill’s long-term goals include creating a predictive model of simulator sickness that can predict what level of sickness one can expect. There is also hope the improvements in the virtual experience will help those who utilize virtual reality for health benefits, since they’ll be able to engage longer with their VR experiences.